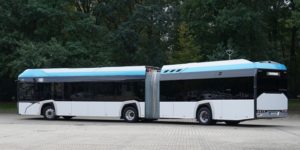 Hamburg first trialled zero-emission Solaris buses eight years ago with the Urbino Electric and Urbino Hydrogen models. Solaris, a Polish company that is part of the Spanish CAF Group, has also been offering solo fuel cell buses since 2019 and sold around 100 buses so far. Now Solaris expands on the theme with an articulated Urbino 18 Hydrogen bus.

The new H2 articulated bus premiered at the third ‘Solaris Talks’ event. Here, in-house and invited experts gave presentations on their real-world experiences of a future-oriented and emission-free public transport service, while invited experts presented their practical experiences. Solaris invited about 150 guests to Krakow, while more people experienced the presentation online as Solaris streamed the event live all over the world.

At the beginning of the presentation, CEO Javier Calleja explained that as a market leader, Solaris had been timely in reacting to the increasing demand for buses of this type with the 18-metre Urbino Hydrogen. This leadership continues now by presenting a product ready for series production. Calleja revealed that the first deliveries of this new bus will take place in the second quarter of 2023. He promised more details and a chance for attendees onsite to explore the buses themselves after the expert presentations.

The Solaris Talks event was opened by Lukasz Chelchowski, Bus Development Director at Solaris. He said that these products have had a positive effect on the image of public transport. As the leading manufacturer of zero-emission buses produced in Europe, the company can now look back on 2,000 vehicles that have been ordered so far. In 116 cities and 20 countries in Europe, he said that the Urbino series prove every day that the brand stands for experience, knowledge and competence, as well as flexibility.

Thanks to the modular design, he said, vehicle sizes could be offered in six lengths (9m, 10.5m, 12m, 15m, 18m and 24m) with seven types of propulsion (battery, fuel cell, trolley, hybrid, mild hybrid, CNG and diesel). The company also offers various battery (high power, high energy) and charging options (plug-in, pantograph, inverted pantograph), which is also very attractive for customers. Alternative drive concepts accounted for 41 per cent of all orders last year, and Chelchowski reminded the audience that the company’s focus will soon be exclusively on zero-emission drive solutions.

Cheldowski outlined the company’s zero-emission timeline: In 2001, Solaris started with trolleybuses, two years later, they added traction batteries. The first battery-electric city bus entered the company’s lineup in 2011. In 2014, the first H2 bus followed, whereby fuel cell technology was used as a range extender. In 2019, series production of the regular fuel cell service bus started, and in 2020, battery-electric articulated buses from Solaris were already hitting European streets. He added: “In 2022, the Urbino 18 Hydrogen will drive the way forward.”

It is the smaller details revealed between the lines at the Solaris Talks that make the new bus so interesting: The heart of the Urbino 18 hydrogen bus is a state-of-the-art hydrogen fuel cell that functions as a miniature hydrogen power plant, as Pawel Mankowski, head of Solaris’ hydrogen technology team, describes it. Hydrogen is carried in tanks on the roof and is converted by the fuel cell into electricity, which is then transferred to the drivetrain.

The heart of the bus mentioned by Mankowski is the new 100-kilowatt fuel cell from Ballard.  Solaris gives the fuel cell a service life of 25,000 hours, while Ballard itself says that 30,000 hours is to be expected. Sensors in several places are supposed to make the technology, which Solaris says is already very safe, even safer. The bus manufacturer points out that if there are errors, they are, unfortunately, always of a human nature. In-house batteries with a capacity of around 60 kWh installed in the vehicle served as an auxiliary power source, e.g. during acceleration, and as a storage unit for recovered energy.

In the new articulated bus, Solaris has dispensed with the conventional engine compartment. The space saved as a result has made it possible to increase the vehicle’s passenger capacity and redesign the seating layout. This allows a total of 53 seats to be fitted, 20 of which are in the low-floor area. The hydrogen tanks have a total capacity of 51.2 kg and have been mounted on the roof, while sensors were also installed in several places to ensure that the technology was more than safe. The manufacturer says that completely refuelling the vehicle takes about 20 minutes.

Solaris has been serving the mass-produced hydrogen bus business since 2019, and the H2 bus market has see strong growth since then, with 170 new vehicles added last year, as Pawel Mankowski elaborates. In the first half of 2022, Chatrou CME Solutions has proven a total of 49 new registrations in this segment. In total, there are now 310 buses in use in Europe that draw the electric energy required for driving from a fuel cell. Pawel Mankowski pointed out that in parallel, the number of corresponding filling stations is growing, and currently numbers 230 stations. These are mostly built exactly where they are required: at the depots of the public transport service providers, and occasionally in cooperation with the city if it is responsible for the bus transport.

The EU is planning to produce one million tonnes of renewable hydrogen and 6 gigawatts of renewable hydrogen electrolysers in the years 2020-25 to serve the growing market for this renewable energy source in an attempt to achieve the set goals of the newly-adopted European climate law of achieving climate neutrality by 2050. From 2025 to 2030, the target is 40 gigawatts and then already ten million tonnes. What Pawel Mankowski did not address was the question of how much hydrogen would be available for public transport or how much would be required. The question of how these large quantities of renewable hydrogen are to be produced competitively in terms of costs was also not mentioned.

Cheap hydrogen is the basis for saying goodbye to fossil energy

The fact is, and this is also what Javier Calleja would like to see, that these developments will happen with political instruments. The Solaris CEO says that far more commitment is required from European politicians to achieve a transport transition off fossil fuels, as a look at Europe’s infrastructure shows. Fixed targets can be achieved when the cost gap between renewable hydrogen and fossil alternatives is reduced or, ideally, closed. In this context, Solaris points to a parallel and the overall package that the company is offering: After an analysis of the planned use with line lengths, rotations and vehicle sizes, the refuelling infrastructure would also be worked out with the customer during the consultation, because, according to Javier Calleja, a cooperative partnership leads to the best results with this type of drive.


In this context, the transport companies that allowed Solaris to monitor the system should also get some credit. With eSConnect, the Solaris engineers have a digital tool to follow the vehicle and the customer. Thanks to “real-time tracking and monitoring”, they can provide the best possible support in daily use and also generate improvements for future vehicles. By offering new, technologically more advanced and emission-free vehicles, Solaris could also share its know-how with other interested parties – and not only during the Solaris Talks series. Everyone is invited to shape a common future, as Javier Calleja concluded. And if one looks at the big picture, then politics also belongs on board to create a future for bus manufacturers like Solaris, who have made the vehicles needed for the specified climate protection targets ready for series production on their own, without the kind of government support.

Solaris is well represented across Europe with almost 70 hydrogen buses with customers in Italy, Germany, the Netherlands, Sweden and Poland. New deliveries to customers in Spain, France, the Czech Republic and Slovakia, among others, will start soon, and the number of vehicles would then exceed 100. And most transport companies have already been asking for an articulated fuel cell bus for some time, explained Romuald Witkowski, head of project management at Solaris.

Besides Solaris, only Van Hool has a hydrogen fuel cell articulated bus

Now, again, the Solaris team can now deliver in response to demand. Another thing worth mentioning is that the Urbino 18 hydrogen can be type-approved as a class II bus, which allows it to be used in intercity transport. And as is usual with Solaris buses, customers also have the option of equipping this regular-service bus according to their individual wishes because the Urbino series relies on a modular construction kit.

The Polish brand has an almost unique selling proposition; currently, only one other company – the Belgian bus maker Van Hool – offers an articulated bus with fuel cell drive. This means that questions about how much the Urbino 18 hydrogen will cost can be met with nothing more than a smile. There was, however, an answer from Solaris that “it depends on the individual equipment”. Those attending the event wonder that surely there will be a fixed basic price. In view of the subsidy possibilities, which the EU has not yet extended, the price will be a decisive factor in buying and selling, says the company.

This year’s guest speaker of the Solaris Talks series, Alisa Meyer from the alternative propulsion department of Regionalverkehr Köln, in Cologne, Germany, had interesting things to say in her presentation: She spoke about the challenges of introducing and operating hydrogen buses in Cologne from the perspective of a transport company. In her presentation, she showed, among other things, a slide showing the acquisition costs of the H2 buses in her company: Even if the prices are declining, it won’t work without financial support, Meyer said. In the latest purchase, financing did come from the EU, but this time exclusively from the federal German government. The company received a funding commitment of 33.8 million euros for the purchase of 108 new H2 buses.

Solaris is confident that the hydrogen bus business will continue to grow. What in particular makes Javier Calleja so confident? The order situation, he says. To date, a large number of contracts and options have already been signed, as he explains with a smile on his face. On request, there should be a total of another 100 H2 buses. A dynamic field, no doubt. Now the question is whether the H2 bus segment will now move out of its niche and become a permanent fixture in the alternative drive cosmos.

Translation of an original article by Rüdiger Schreiber