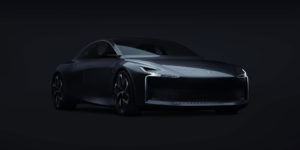 The French start-up Hopium is aiming to build an industrial site in Normandy for the development and production of its hydrogen sedan Machina. Commissioning of the Vernon plant is planned for the end of 2024. The new Hopium site is expected to employ more than 1,500 people in the future.

The 85-hectare site in Vernon – located about an hour north of Paris – will house the first production lines with a capacity of 20,000 vehicles per year as well as a research and development centre. According to Hopium, the location decision is “part of the ambition to develop our hydrogen-powered sedans in France”. According to the Paris-based company, the Machina is a high-end hydrogen-powered sedan inspired by motorsport.

The start-up presented a drivable prototype of its first creation for the first time in June 2021. At the time, it was already said that the Machina was to be produced on an “industrial scale” in the future. As initial key data for its platform, Hopium continues to name an output value of more than 500 hp, which corresponds to approx. 370 kW, and a top speed of 230 km/h on the company website. With one tank of fuel – the company states a refuelling time of three minutes – the vehicle should be able to cover a range of more than 1,000 kilometres.

Hopium’s exterior design aims for a sporty, elegant look inspired by the element of water. Among other things, the front features an imposing radiator grille, which is intended to contribute to the cooling of the fuel cell system. For interior design, the start-up has brought Félix Godard on board, a designer who has previously worked for Porsche, Tesla and Lucid. The eye-catcher in the cockpit is to be a display that extends across the entire width of the vehicle when unfolded, but can also be made smaller if desired.

Originally, the Machina was designed under the working name Alpha 0 in an experimental workshop in Linas-Montlhéry south of Paris. According to a company announcement from this July, ten patent applications have now been filed in connection with the FC system, the interior and exterior design. More are to follow before the end of the year.

The choice of a development and production site is now the next big step Hopium is taking: This moves forward in the plan to launch the first Hopium Māchina models by the end of 2025, expresses Olivier Lombard, CEO of Hopium. “This is a major project that will contribute to the industrial renewal of France. We have chosen Normandy, a region that we believe has all the prerequisites for locating the factory of the future, from its unique geographical location between Paris and the English Channel, reinforced by the Seine axis, to the industrial basin and the major innovation centre in which we are now incorporated.”

The plant, including the R&D centre, is to be built in the so-called Normandie Parc, an industrial site close to the A13 motorway and just a few minutes from Vernons railway station. With the Campus de l’Espace, the area is already home to companies and centres in the aerospace industry that deal with the topic of hydrogen, among other things. Basically, Normandy is “a pioneer in the development of this promising sector”, says the current communication. In 2018, it was the first French region to adopt its own hydrogen plan.

Hopium’s founder, who launched the startup in 2019, is Olivier Lombard, the youngest winner of the 24 Hours of Le Mans to date – he took the class victory in LMP2 in 2011. Lombard has driven hydrogen-powered race cars for seven years, he says. This was a kind of open-air laboratory, the statement says. The first 1,000 copies of the Machina have already been pre-ordered. At the moment, it is no longer possible to reserve them, but only to be put on a waiting list. The company states the preliminary purchase price at 120,000 euros.