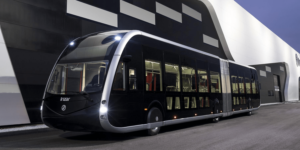 Irizar has received another electric bus order for Spain. Transports Ciutat Comtal (TCC) has ordered 20 ‘Irizar ie’ trams for use in the Pamplona region. Deliveries are scheduled to begin in mid-2023.

The electric buses hold the Spanish bus maker’s latest generation 430 kWh batteries and are equipped with 206 kW traction engines. The electric vehicles have three doors and can hold up to 80 passengers, with 25 seats for passengers, including facilities for differently abled people.

The buses can be charged using an inverted pantograph or by slow charging in the garage. The electric bus has done away with conventional rearview mirrors, as the vehicle sports two digital cameras that display on screens in the cockpit. The company says that this guarantees excellent visibility under all lighting conditions.

The public transport service that will be operating the electric vehicles, TCC Pamplona, deploys a fleet of 159 buses, 135 of which are required in during the rush hour. The bus service network has 553 stops along 24 daytime urban lines and 10 night lines.

Just a few months ago, the Spanish bus manufacturer received an order for 30 of these same Irizar ie trams from Valladolid, Spain. The public transport operator AUVASA (Autobuses Urbanos de Valladolid) also ordered corresponding charging infrastructure. AUVASA expects Irizar to deliver over two years, with the first eleven e-buses due to arrive in Valladolid at the end of 2022.

Also in Spain in May this year, the public transport operator EMT Madrid placed orders for 150 more electric standard buses. The Spanish manufacturer Irizar was contracted with supplying 90 of these with their 12-metre ie bus. In February, EMT put another electric bus line into operation with five electric buses from Irizar on Line 75, which is now the 16th line in Madrid to be served exclusively by electric buses.

Irizar electric buses are enjoying an increasing number of large orders throughout Europe.