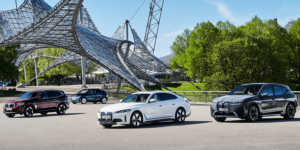 The BMW Group has just revealed that it sold 128,196 fully electric vehicles of the BMW and Mini brands this year up to and including September, more than doubling BEV sales compared to the same period last year (+114.8 per cent).

In the third quarter, the two brands delivered 52,306 all-electric vehicles  (+121.6 per cent). This means that in Q3 alone, 40.8 per cent of the total volume from the current year was sold – the third quarter was significantly stronger than the first half of the year. In the first quarter, there were 35,289 BEVs, and in Q2, the BMW brands sold 40,601 units.

The German carmaker says that at the beginning of the year, supply bottlenecks and war in Ukraine caused a difficult overall situation. This continues to pose hurdles, as the carmaker sold 587,795 vehicles across all drive types in Q3, slightly below the previous year’s level – despite the strong BEV growth. In Q3, 8.9 per cent of all BMW Group vehicles sold were pure electric. “The strong momentum in our all-electric models shows how much our customers are convinced by the BMW Group’s electric product portfolio,” says Board Member for Sales Pieter Nota.

Without providing specific figures, BMW says the i4 and iX models are driving growth, in addition to the iX3, which have particularly high order backlogs. The i7 and iX1 as well as the all-electric long version of the 3 Series in China are also meeting with a “very positive customer response”. The all-electric Mini Cooper SE is also recording high growth rates, according to BMW.

Across all drive types, the BMW Group is less optimistic but reaffirms its previous forecast of achieving a sales level slightly below last year. In its current sales performance announcements, BMW no longer comments separately on plug-in hybrids and only highlights battery-electric cars.

In the coming year, the company will follow with the BMW i5 and the pure battery-electric Rolls-Royce Spectre, which is to celebrate its world premiere in October. BMW still aims to have put a cumulative total of more than two million fully electric vehicles on the road by 2025 with its growing product range.