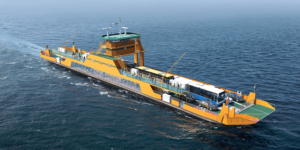 According to the contract now signed with Holland Shipyards, Trafikverket have been made for two ferries with four auto mooring facilities, two charging stations, a simulator facility and a remote control centre. The tender includes another two ferries and two charging stations, which are to be ordered later on a binding basis. The first of these ferries should be delivered in the second half of 2024.

The 86-metre-long and around 14-metre-wide e-ferries with a capacity for 60 cars are to be level 2 autonomous vessels. This means that they will be remotely controlled from the headquarters in Stockholm, but will have a crew on board who can take over control if necessary. Theoretically, however, the ferries can be operated with a push of a button at the control centre.

“The technology works as a support for the staff. The technical system increases security and does what computers do best – learns to repeat the same action pattern. In this way, the most environmentally friendly operation is found,” says Erik Froste, Trafikverket’s shipping manager.

Automooring facilities are special jetties in the harbour that pull the ferry to the quay with negative pressure. This means that the ship’s engines can be switched off earlier, which avoids emissions near the harbour for diesel ships and reduces energy consumption for electric ships.

Once the ferry has docked, the ships should be charged with energy at the shore charging station within just four minutes. The vessels will operate in the Stockholm archipelago where they will primarily run on electricity but will have backup engines that run on a diesel substitute. The investment in autonomous ferries is part of Trafikverket’s Vision 45 plan for a climate-neutral ferry service by 2045.

Nine ships to get H2 systems with FPS & Holland Shipyards