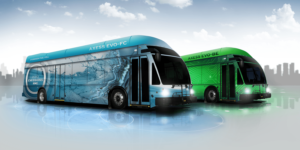 BAE points out that over 55,000 Plug fuel cells are in daily service across North America. This cooperation was announced in April 2021 under which the two companies offer transit operators in North America an all-inclusive, scalable system to reach zero emissions, providing required site, vehicle, and service solutions.

On the Axess EVO-BE platform, BAE Systems’ Gen3 technology will integrate with a battery system supplied by Proterra Powered, providing zero-emission operation under the same common powertrain. Under the multi-year supply agreement signed in September 2022, Proterra will supply its S-Series battery system to power ENC’s Axess Battery Electric Bus (EVO-BE), which will be available in 32-foot, 35-foot, and 40-foot model variants. In terms of battery power, the US American company promises an “industry-leading 738 kWh of battery energy storage”. Deliveries of the first Proterra battery-powered ENC Axess EVO-BEs are expected to begin in 2023.