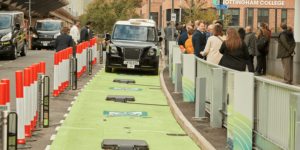 The ‘Wireless Charging of Electric Taxis’ (WiCET) project funded by the British government started a few days ago. At a taxi rank in Nottingham, nine converted electric and hybrid taxis now charge via induction pads with 10 kW. The trial is the first of its kind in the UK and has taken some time.

We first reported the plans in January 2020 when the British government announced funding of £3.4 million to install a test bed for wireless charging cabs. Two years later, WiCET launched into real-life operations with cabbies.

As announced, the taxis come from LEVC and Nissan. The Japanese carmaker has put four Dynamo EVs on the pads; LEVC delivered five TX cabs with range extenders. The small fleet now shares five wireless ground transmitter pads at the main taxi rank near the train station in Nottingham.

The system allows simultaneous charging of multiple vehicles so drivers can use the rank for short, top-up charging while they queue for fares without needing to leave their car, reads the announcement.

The cabs come retrofitted with receiver pads. Drivers will complete “a simple process” on a screen to align the taxi over the pad to initiate the induction charge. The in-car system was designed at Coventry University. The team worked with taxi drivers “to understand exactly what they need from the wireless charging system,” explained Professor Stewart Birrell, who was in charge of the project. This has resulted in an in-vehicle interface that allows for much more accurate parking and efficient charging, so Birrell.

A first pilot testing phase demonstrated the wireless charging system as being around 90% efficient, and the taxis will charge at 10 kW.

The technology inside the pads comes from Lumen Freedom, who says they have been working closely with the WiCET Project Team since the beginning of 2021 on developing technical requirements whilst providing evaluation and development for the successful first phase of the project.

The partners hope to show that wireless charging offers the potential to boost the transition to Electric Taxis as the UK heads towards the 2030 ban on petrol and diesel cars. Eventually, wireless charging could lead to reduced street clutter for charging vehicles and could be rolled out more broadly for other uses, says WiCET.