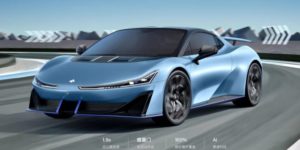 GAC Aion has completed a financing round of 18.29 billion yuan (2.56 billion euros), in which 53 investors participated. The option of an IPO will probably now be explored with the strategic investors.

The deal saw 1.383 billion shares issued, representing 17.72 per cent of GAC Aion. Parent company GAC now holds 76.89 per cent of its NEV subsidiary, down from 93.45 per cent previously. This means that after the financing, GAC Aion is valued at 103.2 billion yuan, or the equivalent of about 14.5 billion euros.

GAC said the proceeds will not only provide GAC Aion with access to industrial resources in the field of new energy vehicles, but also sufficient funding for new product development, next-generation batteries, research and development of electric powertrains, autonomous driving, and smart cockpits.

GAC Aion was founded in 2017 and now has five purely electric models on the market. Some of these are characterised by enormous technical data and sometimes offer a range of over 1,000 kilometres, according to the Chinese test cycle. In September 2022 alone, GAC Aion was able to sell over 30,000 vehicles.

Only in mid-October did the company start up its second factory a few months ahead of schedule – December was originally planned. This gives GAC Aion a production capacity of 400,000 vehicles per year, which is to be increased to up to 600,000 cars in the future in multi-shift operation. In addition to the plant expansion, GAC had recently invested heavily in its NEV subsidiary: In August, both subsidiaries for electric drives and in-house LFP battery development were established. In addition, GAC Aion announced the Hyper electric sports car brand and a 913 kW electric sports car in September.

Potentially, GAC Aion could raise more funds from the capital market in the future. According to the CN EV Post, General Manager Gu Huinan had stated in March that GAC Aion would look into an IPO after completing Series A financing. Separately, GAC Group Chairman Zeng Qinghong had said that GAC Aion was aiming for an IPO in 2023.

Nio backs away from leasing-only offers in Europe