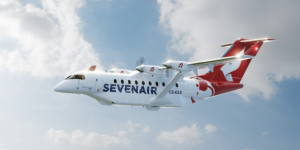 Swedish electric aircraft developer Heart Aerospace has signed a memorandum of understanding with Portuguese airline Sevenair for the sale of three units of its ES-30 hybrid-electric regional aircraft unveiled in September.

The ES-30 is reportedly designed to carry up to 30 passengers and has replaced the ES-19, the previously planned 19-passenger concept. The MoU also includes an option for three more aircraft. It is not clear from the announcement by when and under what conditions the now concluded letter of intent will result in a binding order.

The ES-30 is a shoulder-wing aircraft and is powered by a total of four electric motors. The energy for the electrically driven propellers comes from an unspecified battery. This is said to be sufficient for 200 kilometres. The “extended range” of 400 kilometres is achieved via the so-called “reserve hybrid configuration”: two turbo generators powered by sustainable aviation gasoline serve as a backup during the battery-electric flight, but can also be used as range extenders on longer routes. According to the announcement, with 25 passengers on board, even up to 800 kilometres are possible – “including aviation-typical reserves”, as Heart emphasises.

Sevenair is a regional airline that currently operates seven routes in Portugal, all of which can be covered by the ES-30s. Heart Aerospace says it now has a total of 230 orders and 100 options for the ES-30s, as well as letters of intent for a further 99 aircraft.

“We believe the ES-30 will be a game changer for the short distance regional flights offering low noise and no emissions,” says Alexandre Alves, Sevenair’s Chief Commercial Officer. “These features combined with the possibility of decreasing operating costs heavily impacted by fuel and maintenance will allow any airline operating the aircraft to offer new routes that before were not viable and expand the regional air connectivity to a broader spectrum of passengers.”