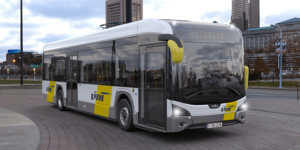 In Belgium, the Flemish public transport company De Lijn has ordered 252 additional depot charging stations for its electric and hybrid buses. The order goes to SPIE-Ekoenergetyka as an extension of the existing cooperation. The new charging stations are scheduled to go into operation in 2023 and 2024.

SPIE-Ekoenergetyka is a joint venture between SPIE Belgium and the Polish charging infrastructure manufacturer Ekoenergetyka. The partners have not revealed further details on the contract details and the type of charging stations, saying only that further charging infrastructure has been ordered on the basis of the installations already carried out and that the agreement also includes the commissioning and maintenance of the equipment in addition to the delivery.

In July this year, De Lijn procured the charging and depot management system PSIebus from the German supplier PSI Transcom for its electric buses with a contract worth 11.2 million euros. In Germany, PSI Transcom’s software is used in bus depots in Berlin, in and around Hamburg and Munich, among other places.

Since 2019, the public transport operator De Lijn has exclusively procured buses with alternative drives. These initially included buses with hybrid drives. In the meantime, the Flemish-Belgian company is increasingly turning to purely electric buses. In spring, for example, the board of De Lijn launched a procurement procedure for up to 1,250 electric buses with lengths between 8.5 and 24 metres. This procedure runs parallel to a framework tender from last year for 350 12-metre electric buses. At the end of 2021, De Lijn ordered 60 electric buses from the latter package from Van Hool and VDL.