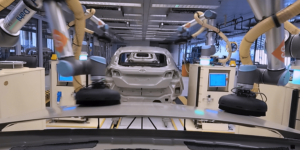 Ford is apparently planning to accelerate the switch to electric vehicles in Europe. According to reports in German and UK media, production of the internal combustion Fiesta small car in Cologne will end at the end of June 2023, a year earlier than planned. It looks likely that plans for electric production will also be brought forward.

Although the US carmaker has not yet issued a press release yet on the early end of Fiesta production in Cologne, the German business and trade newspaper Handelsblatt writes that the European subsidiary of the US car company has confirmed that Fiesta production will end in June 2023. To date, the German magazine Automobilwoche and the British magazine Autocar reported the plans, but initially without confirmation from the company.

So far, Ford has planned to offer only electric cars in Europe by 2030. It is not clear whether this target will also be brought forward. In view of the increasing demand for electric vehicles, Ford is at least adjusting the production plans for the first European electric car models. “We need the plant in Cologne for our new electric models,” said Martin Sander, head of electric for Ford Europe and also chairman of the board of Ford Germany.

In addition, the production of internal combustion engines is also ending in Cologne. The 1.0-litre petrol engine that rolls off the production line there for other locations will, in future, be manufactured at the Craiova engine plant in Romania. The production of the combustion engine models S-Max and Galaxy in Valencia, Spain, is also scheduled to end in April 2023. Since sales figures for the two vans have fallen sharply, the Valencia plant is now to concentrate on the SUV model Kuga – in addition to its conversion for electric vehicle production.

Ford has already been preparing for the production of electric cars in Cologne for some time now. The early end of Fiesta production there will allow a quicker market launch of the second electric model based on the Volkswagen MEB modular system. Indications as to the exact timetable differ. So far, Ford has confirmed the first MEB model for 2023, and the second for 2024.

According to Handelsblatt, series production of the first European electric model in Cologne will not start until the end of 2023, with the second model to follow six months later – more likely in mid-2024. The German publication Auto, Motor und Sport also assumes a production start in 2024.

Citing a Ford employee, Automobilwoche writes that production of the second model should start as early as summer 2023 – about a year earlier than planned. The source probably did not confirm whether this is possible if Fiesta production runs until June 2023.

“We will introduce three new exciting electric passenger vehicles and four new electric commercial vehicles in Europe by 2024. We plan to sell more than 600,000 electric vehicles in the region by 2026, and the electric passenger vehicle production at the Cologne Electrification Centre will reach 1.2 million vehicles over a six-year timeframe,” Ford is quoted as saying by Autocar magazine. The EVs are likely to be the two Cologne MEB models and the electric Puma, to be built in Craiova. The commercial vehicles include the E-Transit Custom.