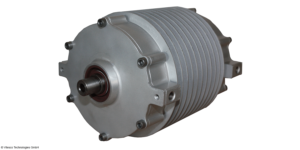 At this year’s motorbike trade fair EICMA, the drive supplier Vitesco Technologies is showing the second development stage of its hybrid concept for motorbikes, which was presented last year. But there are also new Vitesco solutions for smaller two-wheelers.

First to the motorbike system, which was still a pure demonstrator concept at its premiere in 2021. In the 2022 version, the 12 kW electric motor and the removable 1.5 kWh battery will enable the hybrid concept to travel up to 30 kilometres and up to 60 kilometres per hour in pure electric mode.

On the combustion side, the system is designed for motorbikes with a displacement of more than 125 cc and comprises a 48-volt electric motor, an automated manual transmission and, as the “control centre”, a PDCU control unit (Powertrain Domain Control Unit), the so-called Master Controller. This component, which originates from the passenger car sector, controls the 48-volt drive, communicates with the M4C engine control unit of the combustion engine and decides when to drive electrically, when to drive “classically” and when to use a combination of drive types.

“For medium-sized and large motorcycles with combustion engines, we expect that future exhaust emission limits can only be met by using hybridization in combination with an automated manual transmission. With this aim in mind, our development focus was initially entirely on reducing CO2,” says Torsten Bellon, head of the 2-Wheeler & Powersports product line at Vitesco Technologies.

Since EICMA 2021, the developers have further adapted the technology, which originates from the passenger car sector, to the motorcycle-specific requirements, developing many additional functions “that are only possible with an electrified powertrain”, says Bellon. “During our development work, it became increasingly clear that our hybrid concept opens up completely new possibilities for making motorcycling more dynamic, more comfortable and safer.”

Together with the hybrid concept’s 32 kW combustion engine, CO2 emissions are expected to be reduced by up to 75 per cent in the current WMTC (World Motorcycle Test Cycle), according to Vitesco. At the same time, the hybrid system increases the total weight by only about 20 kilogrammes – the motorbike exhibited in Milan weighs 170 kilogrammes. According to the supplier, this makes it not only significantly lighter than a fully electric motorbike with today’s technology, but also much cheaper.

In addition, the company is presenting a demo version of its 48-volt system for electric light motorbikes and scooters with 3 to 7 kW power for the first time. In addition, Vitesco will present the EMR3 electric axle drive, which has already proven itself in the passenger car market, as a solution for high-performance all-electric three- or four-wheeled vehicles at the trade fair in Milan. On 8 and 9 November, the EICMA will be open to the press and trade visitors, then open to the public from 10 to 13 November.

Gogoro partners up with Zypp Electric in India