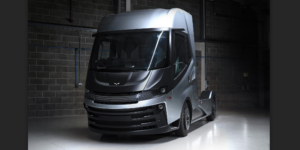 In the UK, a startup called Hydrogen Vehicle Systems (HVS) has just unveiled its design of a hydrogen commercial vehicle. The hydrogen powertrain is being showcased in the form of a 5.5-tonne technology demonstrator.

HVS says the demonstrator offers a hint into the company’s planned 40-tonne zero-emission HGV (Heavy Goods Vehicle). The young Glasgow-based company claims that depending on the route travelled, road conditions and driving style the fuel cell truck will have the capacity to cover in excess of 500km. This a fairly average range for a fuel cell truck, but the company claims it will be “the first indigenous UK Hydrogen HGV, designed and built from the ground up.”

The HVS tractor units will be built on an all-new chassis, which is designed in-house around the hydrogen powertrain. This consists of pressurised hydrogen cylinders, fuel cells, an energy storage system and eAxle.

At the moment, the Glasgow-based company seems to be very much in the planning phase saying that it is undertaking development work at Horiba MIRA, Nuneaton, Warwickshire. HVS says that it “envisages that it will open an R&D, engineering and pilot production facility in the Midlands, taking advantage of the region’s traditionally strong motor industry skills base, alongside a permanent UK-based production facility.”

So far, the Scottish company has been supported on the road of vehicle development with funding from Innovate UK, Scottish Enterprise and Energy Technology Partnership. HVS also already has a strategic investment partner with the service station and grocery corporation, EG Group, which is able to offer hydrogen refuelling infrastructure, a fleet customer base and the potential for global scalability.

The company has not yet revealed a schedule for production. On its website, HVS says it has received “significant interest from potential customers during the vehicle development phase with current pre-orders of over 400 units”.