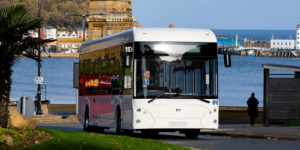 The eight-metre battery-electric bus is the latest in a six-model Sigma range (from seven- to 12-metres) to hit the UK market, joining seven and 10-metre models. The company says its ability to produce such a wide range of different buses has put it in a good market position, saying its competitors will first have a midi-bus out next year.

To date, Mellor says it has received more than 100 Sigma orders in both the UK and Europe. The company recently confirmed orders with London Hire for a low-floor accessible Sigma 7, along with a “fleet order” for the newly revealed Sigma 8 for an un-named regional operator.

The British bus maker has made numerous sales from the Sigma range in mainland Europe. The company says a total of 49 confirmed orders have been placed from the Scandinavian and German-speaking DACH regions. This includes “a large order for a high-profile Swedish operator”. In summer this year, Mellor announced that for sales in Germany and Austria, the Hamburg-based company Jebsen & Jessen Industrial Solutions is now responsible for the sales and service of Mellor’s electric buses in both countries.

To accommodate driving on the other side of the road, Mellor has also provided a left-hand-drive Sigma 7 demonstrator for prospective customers in Germany, Sweden and Holland. In the coming months, the company says it has an intensive demo programme planned for customers in these countries.