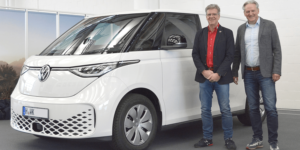 The first unit delivered is a white ID. Buzz Cargo, which went to Wolfgang Kempe GmbH, a full-service provider for bathrooms and heating in Isernhagen. Immediately after the handover, the vehicle was covered with the company logo and will then be on the road with the service employees in the greater Hanover area.

“We decided on the ID. Buzz Cargo because it perfectly combines sustainability and the space we need,” says entrepreneur Wolfgang-Nils Kempe. “We have already been dealing with modern ideas around heating and with technical innovations for years, installing heat pumps and solar systems. So it’s clear that we also want to switch to alternative drives for our vehicles.”

In the coming days, a wallbox will be installed at the company headquarters to charge the electric transporter. More charging points are likely to follow, because Kempe says it wants to convert its fleet completely to electrified vehicles in the future. His company fleet currently consists of eight VWN vans. In addition to the ID. Buzz Cargo that has just been delivered, an ID. Buzz Pro, i.e. the passenger car version that is currently only available as a five-seater, has been ordered and is being prepared.

It is already known that VWN plans to produce around 15,000 ID. Buzz at the Hanover plant this year. However, not all of these vehicles will go to customers: The first 6,000 vehicles will go to dealers’ showrooms, followed by customer vehicles. In the past few days, there have been an increasing number of photos on social media platforms of trucks full of ID. Buzz or the first vehicles at the dealers. With the first deliveries, it is clear that the stocking of dealers with demonstration cars is coming to an end and that there will be more deliveries to corporate and private customers.

VWN does not give a current interim status on the order volume in the announcement on the first delivery. In mid-September, it said that 12,500 orders had been received, more than half of them for the cargo version. On the VW UK website, the company also added a disclaimer to excuse the lack of transparency or deadlines for deliveries: “Availability of navigation and rear view camera may be restricted due to supply shortages, depending on the time you place your order. This is down to a number of reasons, including component shortages, in particular for semi-conductors, and ongoing impacts of the war in Ukraine. Please be assured we are working hard to find solutions to supply chain issues and provide accurate information to your local Van Centre, who will always be best placed to keep you up to date with specific production and delivery timings.”