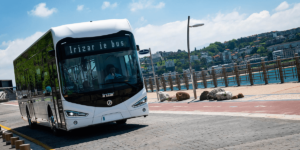 The Spanish bus manufacturer Irizar has received its first order from Poland. The order is for four Irizar ‘ie bus’ electric buses in the 12-metre version, with an option for three more. The chargers for these will be supplied by Irizar subsidiary Jema Energy.

This order will make Krakow the first Polish city to have Irizar electric buses in its fleet. In January this year, the Spanish bus-maker gave Krakow residents got the chance to travel in one of the company’s ‘ie tram’ electric buses that were doing tests in several European cities.

The model chosen by MPK Kraków is the 12-metre-long Irizar ie bus. The public transport vehicles use in-house Irizar battery technology, have three doors, one driver’s seat, 26 passenger seats and capacity for transporting 91 passengers. Like a number of electric buses on the market, these can be charged using a bottom-up pantograph or with a Combo 2 charging outlet on axle 1 in the garage.

Marek Gancarczyk, the MPK Krakow spokesperson said: “We’re very happy that next year passengers in Krakow will be travelling in new Irizar e-mobility electric buses. This will be the first electromobility project in Poland for this company. We’re looking forward to good cooperation with Irizar e-mobility in the future.”

In Spain in May of this year, 90 units of Irizar’s 12-metre ie bus were ordered from the public transport operator EMT Madrid placed. In the same tender, EMT also ordered 60 Urbino 12 Electric from Polish manufacturer Solaris.

Aiways to supply Phoenix with over 100,000 BEVs