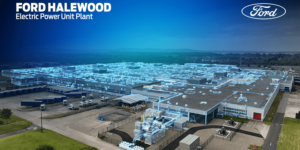 Ford is increasing investment in its transmission plant in Halewood, UK, to boost the production of electric vehicle components. The US company announced £230 million last year and is adding £150 million to scale annual output from 250,000 to 420,000 units.

The Halewood plant will eventually equip 70 per cent of Ford electric vehicles for sale in Europe by 2026. The company targets to sell 600,000 EVs with components from Halewood on the continent by that time. Longer term, Ford’s European electrification plan centres on zero-emission car sales by 2030, followed by all vehicles, including vans, by 2035.

Ford further states 500 staff members are being upskilled in EV component assembly at the in-house facility. Kieran Cahill, Ford’s European Industrial Operations vice-president, adds Ford was “a global American brand, woven into the fabric of Europe for more than 100 years and a major employer here at Halewood for almost 60 years”.

Once the factory is fully operational by 2024, Ford workers will build the so-called Power Unit, i.e. the drive comprising an electric motor and a single-speed gearbox. It replaces the engine and transmission of a conventional engine vehicle by propelling an EV using battery energy. Currently, Ford is making ICE components in Halewood.

Tim Slatter, chairman of Ford UK, said: “This is an all-important next step for Ford towards having nine EVs on sale within two years. Our UK workforce plays a major role in Ford’s all-electric future, demonstrated by Halewood’s pivot to a new zero-emission powertrain and E: PRiME’s innovation at Dunton in finalising the production processes.”

Halewood will deliver components to assembly lines at Ford Otosan plants in Romania and Turkey, making up a significant share of Ford UK’s annual export value from the Merseyside plant and Dagenham, currently worth £2.1 billion annually.

Sure enough, this latest investment includes government support from UK Export Finance. International Trade Secretary Kemi Badenoch said: “Our support for Ford is great news for jobs in Essex and Merseyside and British manufacturing as a whole.” He added Ford was a “major employer” in the UK.

For Ford, Halewood’s selection marked its first in-house investment in all-electric vehicle component manufacturing in Europe. The company add Halewood’s transition to electric component production was integral to building a profitable European business centred on only zero-emission cars and vans by 2035.

Valmet kicks off production of the Lightyear 0