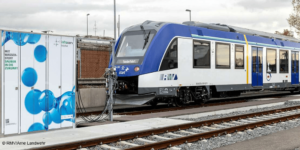 The start of the first fuel cell trains in the Taunus network is apparently bumpy. According to a report, only two of the six H2 trains that were recently scheduled to run in the Taunus region can currently be used – due to technical problems.

According to the local publication Hessenschau, there are difficulties with the refuelling of the vehicles, among other things. Actually, the Coradia iLint should run on the RB15 line between Frankfurt, Bad Homburg and Waldsolms-Brandoberndorf. “This is currently not possible. Therefore, a rail replacement service has been set up, which covers about half of the journeys,” writes the Hessenschau.

The blue and white Coradia iLint trains are refuelled at Industriepark Höchst, where Infraserv Höchst operates a hydrogen filling station that is compatible with the trains. Not only were hydrogen storage and compressor facilities built for this purpose in addition to the actual refuelling facilities, but the track facilities in the industrial park were also expanded.

The RMV subsidiary Fahma ordered a total of 27 fuel cell trains from Alstom in 2019 and presented the first example in November 2022. However, according to RMV, not all of the vehicles ordered have yet been delivered on time. From spring 2023 onwards, the H2 trains are supposed to be used on further lines of the Taunus network.

Polestar to boost performance via software upgrade in the USA