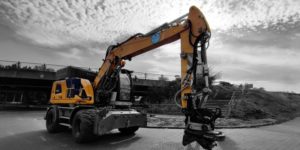 The Dutch supplier zepp.solutions is using its fuel cell systems in the construction machinery industry for the first time in two Liebherr excavators converted from diesel to hydrogen power.

This is the result of a company announcement sent to us by e-mail. Specifically, the two 916 Litronic excavators, which were converted under the direction of Terberg Techniek, have both the fuel cell system and the hydrogen storage units from zepp.solutions on board. According to the Dutch, the FC system installed is the same type of system (“Y50”) as that used in an H2 water taxi in Rotterdam that went into operation last year.

The two excavators belong to the Dutch construction company Jos Scholman. After their conversion, they were tested for six months, according to the statement. As a result of these tests, the project participants state that the dredgers are reliable and perform as expected. The companies do not provide further technical details.

“We are thrilled to see our fuel cell systems being used in the conversion of these Liebherr excavators, and to play a role in helping the construction equipment sector reduce its carbon emissions,” commented Kevin Schreiber, co-founder of zepp.solutions. “At zepp.solutions, we are committed to providing innovative, reliable, and cost-effective fuel cell technology to a wide range of industries, and we look forward to continuing our partnership with Terberg Techniek on future projects.”

For it is not to stop at two hydrogen excavators: Conversion specialist Terberg Techniek is said to have developed a conversion kit around zepp.solutions’ FC systems that is not limited solely to the type of excavator already implemented. With this, the duo “also plans to convert other construction machines from diesel to hydrogen-electric drive”.

According to zepp.solutions, the Y50 fuel cell system is characterised by its extremely compact and highly integrated design. The PEM fuel cell system solutions included all components, subsystems and control software required to convert hydrogen gas into electric power with maximum efficiency and operational stability, it says. The system has proven itself in this way in the material handling and marine sectors – both with OEMs and converters.

Change in management at Solaris