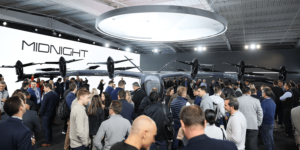 Stellantis and the Californian flying taxi start-up Archer Aviation have announced a significant expansion of their partnership. They will now join forces to manufacture Archer’s Midnight, the electric VTOL the young company debuted a few months ago.

Specifically, Stellantis will work with Archer to help them build its first factory to produce the eVTOL. Last November, Archer chose a site near an airfield in Covington, in the US state of Georgia. The United Airlines partner said it was targeting a capacity of 650 flying cabs a year from 2024 and increasing production significantly within ten years.

Now announcing a deepening of the relationship with Stellantis, the goal is for Stellantis to mass-produce Archer’s electric air taxi as the exclusive contract manufacturer. The company added its contribution would allow Archer “to strengthen its path to commercialisation by helping it avoid hundreds of millions of dollars of spending.” The initial announcement saw Archer investing $118 mn over the next ten years. Stellantis will now provide up to $150 million of equity capital for a potential draw by Archer in 2023 and 2024.

However, this is conditional on Archer achieving “certain commercial milestones,” expected in 2023. These have yet to be detailed, but Stellantis speaks of the “rapid scaling of aircraft production” in Georgia. Stellantis also intends to increase its strategic stake through future purchases of Archer shares on the open market.

And Archer is not without clients or plans. The first concept eVTOL surfaced in May 2020, and Archer has filled in gaps ever since.

The Midnight, as the company now dubs the four-seater known as ‘Maker’ in the prototype stage, initially targeted intra-city travel of around 60 miles (just under 100 kilometres). However, recent announcements, including from Stellantis, specify “back-to-back short-distance flights of about 20 miles with approximately 10-minute charging cycles in between”.

Such real-life use cases have also been taking shape. Archer relies on cooperation with United Airlines. The company, in February last year, said it wanted to run 200 Archer eVTOL eventually, and in November revealed the first route: Downtown Manhattan to Newark Liberty International Airport. They estimate the ultra-short flight to take ten minutes using existing infrastructure like the Downtown Manhattan Heliport.

As reported, the partnership with Stellantis has also been standing for some time, first via the Group’s brand FCA. Today, Carlos Tavares, Stellantis CEO, emphasised that they had been working “closely with Archer for the past two years, and I am continually impressed by their ingenuity and unwavering commitment to deliver.” He added, “Deepening our partnership with Archer as a strategic investor with plans for growing our shareholding demonstrates how Stellantis is pushing the boundaries to provide sustainable freedom of mobility, from the road to the sky.”

Adam Goldstein, founder and CEO of Archer, added, “Stellantis’ continued recognition of Archer’s progress toward commercialisation, and today’s commitment of significant resources to build the Midnight aircraft with us, places Archer in a strong position to be first to market.”

The statement concludes that Archer brings its team of eVTOL, electric powertrain and certification experts. At the same time, Stellantis will contribute advanced manufacturing technology, expertise, experienced personnel, and capital to the partnership.

CES: Aska shows a “real flying car” with the A5 eVTOL