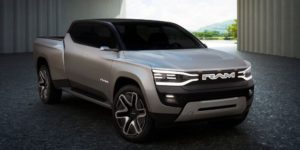 Ram Truck, the US commercial vehicle subsidiary of Stellantis, has brought the Ram 1500 Revolution Concept to CES. The all-electric pickup shall hit the US market in 2024 as the series Ram 1500 BEV but for now mostly stands out in the design.

The company had announced bringing a battery-electric pickup truck about a year ago, however, with no more than a teaser image and base information. Ram’s e-pickup relies on the STLA Frame architecture by Stellantis Group and uses two electric drives on the front and rear axles. Ram Trucks has yet to reveal details on the AWD and the battery to power the Ram 1500 BEV. However, Ram is already promising up to 350 kW fast charging can add up to 100 miles of range in ten minutes thanks to 800-volt technology. This and other features we get to in a bit are to make the Ram 1500 BEV “the leader” in the segment’s defining criteria: range and charge time, towing and payload.

Otherwise, the electronics exhibition in Las Vegas focuses on the concept’s design. The cabin has been moved forward and lengthened by about ten centimetres compared to the internal combustion Ram, while the loading area remains unchanged in length. Ram puts the continuous load length from the front boot to the tailgate at up to 5.5 metres. The now larger passenger compartment is also designed to offer flexibility, e.g. there are third-row jump seats, which Ram considers an industry’s first. The removable centre console with the fold-flat surface also increases options, and a rail mounting or floor rail system allows for further seating and transport configurations.

The performance data for the electric version are still missing. However, going back to the fact that the Ram 1500 BEV is built on the STLA Frame platform gives a power range. For example, STLA Frame models will have a battery capacity of between 159 and 200 kWh and the largest EDM3 drive modules – the only ones capable of 800 volt – offers between 150 and 330 kW per motor.

Educated guesses, what can be seen at the CES is the exterior. It features all kinds of lighting technology, including on the modernised Ram emblem at the front, a new front luggage compartment, and towing hooks that can be swivelled flush into the body. The passenger compartment comes without a B-pillar, which Ram says allows for a sedan-style door design.

Other features include a centre-split rear door, flush door handles, digital cameras in place of exterior mirrors, and wheel arch extensions with room for 35-inch tyres on 24-inch wheels. The air suspension can be varied using entry/exit, aero and off-road modes. Ram also emphasises the pickup’s manoeuvrability via four-wheel steering with up to 15 degrees of steering angle.

Regarding connectivity and high-tech features, the concept car has an augmented reality head-up display and digital side-view cameras. A camera and sensor system is said to allow level 3+ autonomous driving. In conjunction with this, the vehicle can retract the steering wheel to offer the driver more space. Also new is a personal vehicle assistant in the form of a 3D Ram Avatar that responds to various voice commands from the user. This also includes the ‘Shadow Mode’ when the truck follows the driver’s voice by itself, for example, in situations where the driver has to cover a short distance and does not want to get back into the truck.

Ram aims to electrify all of its vehicle segments by 2030 at the latest. “The Ram 1500 Revolution BEV Concept is our clearest signal yet that we’re on the precipice of something extraordinary at Ram and points directly to where we’re going on our electrified journey,” said Mike Koval Jr., Ram brand CEO – Stellantis. “At Ram, we’ve redefined what pickup trucks can be and will do so again by pushing past what competitors are offering by delivering the best electric pickups on the market.”

Ram Truck is the US commercial vehicle subsidiary of Stellantis. Ram was once a Dodge ICE pickup truck but was established as an independent brand in 2009.