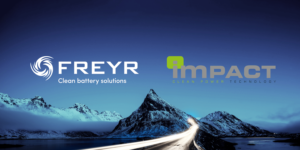 The budding Norwegian battery cell manufacturer Freyr announced its first customer in the e-mobility sector: Impact Clean Power Technology (ICPT), a Polish manufacturer of battery systems for heavy-duty vehicles. The framework agreement between Freyr and ICPT is not yet binding, however.

This is according to a company release from Freyr. In the framework agreement, both sides have agreed to purchase a volume of between 10 and 14 GWh in the period from 2025 to 2030. The contract covers LFP cells based on the SemiSolid platform from 24M Technologies, which will be produced at Freyr’s Giga Arctic battery cell factory in Mo i Rana, Norway. The new factory is scheduled to start production in the first half of 2024.

The contract between Freyr and ICPT is extendable beyond 2030, according to the accompanying memo, and the “orders may reach a value of USD 1.8 billion based on BNEF’s latest lithium price estimates for 2025 and other terms,” Freyr assumes.

Together with orders in the stationary energy storage sector, this means that Freyr has so far signed off-take agreements for a total volume of more than 130 GWh by 2030. “This COA with Impact marks our first commercial agreement to produce fit-for-purpose LFP cells for the E-Mobility market alongside our already strong traction in the ESS sector,” affirms Tom Einar Jensen, co-founder and CEO of Freyr.

“We sought a sustainable LFP producer in Europe that could supply our facility in Warsaw, aiding us in meeting the growing demand for batteries in the E-Mobility space,” adds Bartek Kras, CEO of ICPT. In Freyr, he says, they have found a like-minded partner who is committed to decarbonising important sectors such as commercial transport.

ICPT already signed an agreement with InoBat Auto in July 2022 to develop and supply battery cells. Accordingly, InoBat will develop and transfer prismatic battery cells according to Impact’s requirements. Only a few weeks earlier, Impact Clean Power Technology had announced the construction of a battery assembly plant in Poland. The factory, called GigafactoryX, is to go into operation in 2024 with a production capacity of 2 GWh, with 5 GWh planned in the final stage.

According to a statement from the summer of 2022, the company intends to allocate about half of the Giga Arctic production capacity to “long-term offtake partners”. The remaining quantity is to be reserved “to meet exponentially growing market demand” – i.e. sold to customers without long-term commitments at the best possible price. The Freyr board credits this plan with the potential of two billion US dollars in sales per year.

For the realisation of the 29 GWh plant, Freyr has received financing commitments totalling $1.6 billion, exceeding management’s leverage target, according to these earlier statements. This includes €400 million from Eksfin, Norway’s export credit agency (ECA). By 2030, Freyr aims to have built up total production capacity of 200 GWh. Against this background, Giga Arctic in Mo i Rana could be expanded in the future: The company says it is evaluating adding module and pack assembly as well as recycling and other applications at the site.