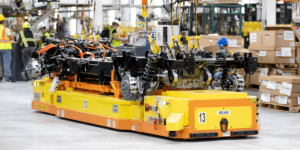 Ford wants to launch electric cars based on its own platform in Europe from the middle of this decade. This is what Martin Sander, Ford’s electric car development manager in Europe said. However, most of the development work will take place outside Europe.

Ford will initially use the MEB in Europe as part of the 2020 agreement with Volkswagen. As reported, two MEB-based Ford models are planned for 2023 and 2024, each with a volume of 600,000 units. Even though no final decision has yet been made on the future of the cooperation with VW on electric cars, Ford is preparing to switch to its own platform for future electric cars in Europe, according to Sander. Ford is “open” to building future vehicles on other systems, whether from VW or “another company”.

However, this will not be developed entirely by Sander’s European team, but in the USA, according to the manager. As the ex-Audi manager told the Financial Times, the new platform is to be “very versatile, very powerful”. However, the project is still in an early phase: “We are exploring all possible options, how far we can go, which segments we can cover with it,” Sander is quoted as saying.

However, the focus is likely to be on larger vehicle segments, not small cars – as is well known, production of the Fiesta in Cologne is being phased out without replacement in favour of MEB production. There are currently no plans to bring a battery-electric Fiesta. “We are not looking at entry-level vehicles at the moment,” says Sander. However, he says the company is open to this in the future, provided battery costs “drop sufficiently”.

Speaking of battery prices: Ford will continue to pass on rising costs to its customers here, says the German manager. Price increases overnight for the Mustang Mach-E are therefore likely to continue.

Instead of competing with Volkswagen, the Stellantis brands or Asian manufacturers with vehicles such as the Fiesta or Focus for volume by engaging in price actions at the expense of margins, Ford wants to focus on a different strategy in Europe in future: It prefers to sell fewer vehicles, but at a better price. To achieve this, however, the models must become distinctive “when the market is becoming saturated with increasingly indistinguishable electric vehicles”, as the Financial Times puts it. Relying on the already widespread technology from the VW Group certainly won’t help if you can hardly distinguish yourself in this field.

Ford expects to make profits with its electric car division in Europe from 2025. If demand shifts to electric cars faster than expected, Ford could also take petrol and hybrid models off the market before 2030. “We keep them running as long as our customers want them,” he said. “If we see in 2028 that there is no demand for [internal combustion engine] products, then maybe we make a call.” But Sander does not believe the EU’s planned 2035 regulation will have any effect, saying it is a “very theoretical conversation because I can’t believe that there would be a big number of consumers asking for [internal combustion engine] products in 2035”.

Ford and Volkswagen have linked their business in some segments by means of cooperations, especially in Europe. While the US group is using the MEB platform for its first European electric cars, Ford is building the new generation of the Amarok pickup for VW (based on the Ford Ranger, including an electric version) or an electric delivery van as a VW offshoot of the Ford E-Transit Custom. However, the global cooperation on autonomous driving in the form of the jointly acquired start-up ArgoAI failed.