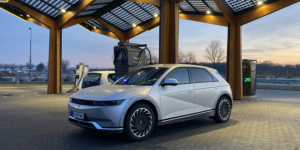 While production was originally slated to start last November, delays due to the Covid-19 pandemic forced the company to postpone the production launch. However, Hyundai is making up for lost time and the new plant will produce additional vehicles besides the Ioniq 5, as the Ioniq 6 and the new Kona Electric will be assembled in the Jurong facility too. Currently, plans for the plant have it producing up to 30,000 vehicles per year by 2025.

The production launch will be accompanied by a charity action, in which the first 100 vehicles will be sold with a special sticker and embossing, and sold through an auction, with bids starting at $1,000. Hyundai will hold the charity auction between Jan 12 and 16 to raise funds for the ‘President’s Challenge’.

The first 100 models will be high-powered twin-motor long-range models, normally priced at $147,800, before production of the single-motor standard-range models begins, which start around $100,000. For both models, Hyundai is offering a 10-year, 160,000km warranty on the Ioniq 5’s battery at 70 per cent.

At the same time, Hyundai has launched the Ioniq 5 in India at the Auto Expo 2023. After originally being introduced as a concept at the IAA in 2019, the Ioniq 5 is the first among the six battery electric vehicles which Hyundai is planning to introduce in India by 2028. Prices are planned to start at Rs 44.95 lakh (about €51,067). This makes it Rs 16 lakh cheaper than its cousin model, the Kia EV6. The Ioniq 5 is available in a single configuration for India, with a single electric motor which along with the 72.6kWh battery pack gives it a claimed ARAI-certified range of 631 km.

As a side note, Hyundai also presented another variant of the Ioniq 5 with its e-Corner module at the CES last week.