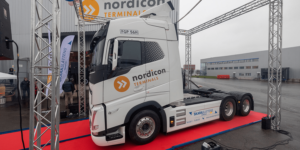 Skaraslättens Transport now employs two electric trucks for container transport at the port of Gothenburg. A third electric truck is to be added soon. But this is only the beginning: in 2023, more electric trucks from a second freight forwarder are to follow – and in significantly higher numbers.

Skaraslättens Transport is Sweden’s largest provider of container transport. According to the company, it transports between 850 and 900 containers to all Swedish container ports every day – most of them via Gothenburg.

The two or soon-to-be three Volvo electric trucks will be used by Skaraslättens Transport to shuttle containers from the consolidation company Nordicon’s terminal in Gothenburg to and from the APM Terminals-operated container terminal in the port.

“We don’t want to be standing on the side-line when the transition takes place – we want to be leading the way, and we’re also seeing our customers increasingly requesting sustainable transport operations. With that in mind, this was a pretty easy decision to make,” says Johan Söderström, CCO at Skaraslättens Transport.

However, Söderström points out that it was nevertheless not a rash decision, but a carefully planned one. “Economically, it’s a challenge, and it’s an investment with a longer payback time,” says the manager. This also has consequences for the customers: “Customers who want to use our electric trucks for their transport needs are therefore urged to sign longer contracts with us, which we think is understandable for them. People are willing to think outside the box and think outside the box.”

Currently, vehicles are charged overnight at the port’s vehicle terminal, which is operated by Logent Ports & Terminals. However, there are also public charging stations in the port itself. Circle K’s station in Vädermotet has six chargers for heavy trucks, each with a charging capacity of 360 kW. More truck charging stations are to follow in 2023.

An expansion of the infrastructure is also necessary because Skaraslättens Transport will not remain the only operator of trucks in the port: Logistics company DFDS also plans to deploy many of its 125 electric trucks ordered from Volvo Trucks in the port of Gothenburg this year.

“It’s really great to see the transition happening here and now. From the port’s perspective, it’s important that we continue to lower the thresholds for those wanting to make the transition to a climate-smarter transport system,” says Elvir Dzanic, CEO of the Port of Gothenburg Authority.