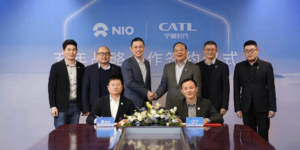 CATL and Nio are expanding their partnership. The Chinese electric car manufacturer is already supplied with battery cells by CATL and has now signed a five-year agreement with the battery specialist on a comprehensive strategic cooperation.

Both companies want to advance technological cooperation with regard to “new brands, new projects and new markets, improve supply-demand coordination, propel overseas expansion, and develop the business model centering on long service life batteries”. At least that is how CATL puts it in general terms in a globally circulated statement, but without being more specific.

CATL and Nio would continue to “leverage their respective resource advantages to build a battery supply system”. According to the statement, the joint goals include providing users with electric vehicles with a “more enjoyable driving experience” based on advanced battery technology.

The partnership agreement was signed at CATL’s headquarters in Ningde by Wei Zhu, executive president of CATL’s passenger car division, and Alan Zeng, senior vice president of Nio, although CATL founder and CEO Robin Zheng and Nio founder and CEO William Li also attended the ceremony. In the announcement, however, none of the four high-ranking managers commented personally on the cooperation.

Concrete effects of the cooperation, for example for the expansion of foreign business with regard to Nio’s activities in Europe, are not yet known.

CATL is currently Nio’s most important battery supplier and all currently available models (also in Europe) use the market leader’s cells. Despite the now closed cooperation with CATL, Nio is broadening its battery supply chain: As reported, the upcoming 150 kWh solid-state battery will come from WeLion, but contrary to previous announcements, supply has probably not yet begun.

As the CN EV Post reports, Nio is relying on another supplier for two new models in China that are soon to go on sale: both the EC7 presented at Nio Day 2022 and the upcoming ES6 model will rely on battery cells from CALB. CALB cells will also be used in the revised ES8 in the future.