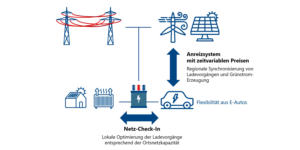 Volkswagen’s energy business Elli and German grid operator Mitnetz Strom started a pilot in the summer of 2022 to optimise charging processes in line with the grid. They aimed to achieve efficient and environmentally-friendly interaction between distributors and VW electric vehicles. Here’s the result.

The main finding is that intelligent charging works both ways – if electric cars charge intelligently, that is in sync with the power grid, EV drivers and electricity customers benefit. “Smart grid integration increases the share of green electricity fed into the grid, makes EV charging cheaper and relieves the burden on local grids,” Volkswagen states.

The pilot project announced in spring 2022 by Volkswagen subsidiary Elli, grid operator Mitnetz Strom and consultancy E-Bridge involved 20 drivers of VW models ID.3, ID.4 and ID.5 from July to September 2022. They used private wall boxes to charge and the Elli smart-charging app. An algorithm coordinated the charging processes between the vehicles and the grid in the background. At the same time, financial incentives optimised user behaviour. According to Volkswagen, in September, more than 80 per cent of the participants were in favour of continuing the project, while at the same time, there were “no losses in charging comfort or bottlenecks in the power grid”.

The smart charging helped to utilise the existing grids better, summarised Volkswagen and saved up to “30% CO2 emissions that would otherwise be produced to generate the charging current,” the statement specifies. These effects were achieved through timing so that more regionally produced green electricity could be used. “In practice, wind power or photovoltaic plants are switched off because the grid cannot always fully absorb the green electricity,” the carmaker explains.

Thanks to an incentive system, the project participants benefited directly from smart charging: “Calculated over the year, more than 40 per cent of the participants were able to reduce their electricity costs through flexible behaviour, thanks to the variable grid fees,” said the project initiators. “Extrapolated, the front-runner saved over 70 euros a year.” Accordingly, the charging management was well accepted: 240 times, participants indicated so-called flexibility windows for their charging processes. In other words, they agreed to postpone charging to suit the grid. No bottlenecks are said to have occurred in the local electricity grids during the three-month test phase.

“The pilot project with real-life charging processes and optimised incentive-based strategies has shown that electric cars offer added value as a mobile power bank for the energy system. This is an important step towards bidirectional charging,” says Dr Niklas Schirmer, Vice President of Strategy at Elli.

“Smart charging helps to utilise existing grids much better,” adds Dr Michael Lehmann, Head of Process and System Management at Mitnetz Strom. “If the scheduled charging times are matched with the limitations of the local grid, up to five times as many electric cars can be connected to a local grid.”

During the pilot, the organisers virtually replicated the infrastructure of a village in the vicinity of Halle managed by Mitnetz Strom. “With a low-voltage grid and around 50 households living mainly in single-family homes, the general conditions there were similar to the situation in many German communities,” says Volkswagen. At the same time, due to the high penetration of renewables, Mitnetz’s power grid is already in a situation that will become increasingly common throughout Germany.

Volkswagen and OVO Energy launch V2X trial in the UK