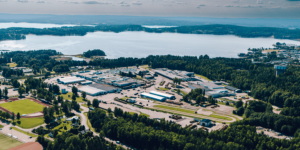 65 million Swedish kronor (about 5.8 million euros) will be invested in the plant in Arvika, Sweden, to enable the production of electric wheel loaders, according to Volvo CE. A new building with an area of about 1,500 square metres is being built for this purpose at the plant that specialises in the production of medium and large wheel loaders. Construction work is scheduled to begin this year. Arvika is located in the east of Sweden near the Norwegian border.

Volvo CE plans to invest a further 360 million Swedish kronor (around 32 million euros) in its plant in Braås, specialising in the production of articulated haulers, by 2027. This investment will serve to expand production capacity at the 45,000-square-metre site in southern Sweden in order to produce a wider range of articulated haulers with different types of drive, including electric vehicles. The exact share of the eMobility investment thus cannot be quantified at the moment.

Both investments should be seen against the background that the company wants to be completely free of fossil fuels by 2040. As an interim goal on this path, Volvo CE wants to reach an electric vehicle share of 35 per cent of its sold machines in 2030.

With the L20 Electric and L25 Electric, Volvo CE already has two light electric wheel loaders in its range. However, the Arvika plant specialises in medium and heavy wheel loaders – so new products can also be expected.

An articulated dumper from Volvo CE with an electric drive exists only as a prototype so far. In July last year, the manufacturer equipped and tested a six-wheeled Volvo HX04 with a hydrogen fuel cell system as part of a Swedish research project.