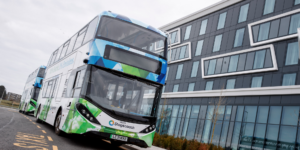 In Scotland, Stagecoach Bluebird has unveiled 22 BYD-ADL Enviro400EV electric double decker buses. The public transport provider will put the fully electric buses into operation in the city of Aberdeen at the end of this month.

The Scottish cities of Dundee and Aberdeen will be participating in the recently introduced European H2-bus project JIVE 2, which plans to bring another 152 fuel cell buses to 14 cities by 2023.

1,000 Tesla for Holland: Even though the Model 3 has not even been introduced yet, the Dutch EV leasing company MisterGreen and utility NLE say they want to reserve 1,000 units once stores open on March 31st. They hope that this way, Tesla will prioritise the Netherlands in terms of the Model 3 delivery schedule.
electrek.co

Adjusting UK funding scheme? The UK government considers reviewing its recently renewed funding scheme for electric and plug-in vehicles in one year, instead of just when it runs out in 2018. The reason is the rapid rise of registrations in the first three months of 2016.
autocar.co.uk

Evercar expands: The LA-based electric vehicle sharing company that rents to customers driving for Uber, Lyft and others, announced a rapid expansion. It wants to increase the number of EVs in its fleet from currently 43 to 1,000 in the coming months.
cleantechnica.com

Convenient chargers in Korea: GS Retail of Korea, part of the major conglomerate GS Group, wants to install electric vehicle charging stations as part of its convenience stores. The project will begin on Jejudo Island and expand across the nation gradually.
koreaherald.com

Aberdeen FCV expansions: The Aberdeen City Council and Co-wheels car club added four Hyundai’s ix35 FCVs to its fleet, bringing the total number of Hyundai ix35 Fuel Cells up to 15 nationwide. The cars will be available to the public through a pay-as-you-go plan, and to businesses for trial purposes.
autovolt-magazine.com

Electrification in Portugal: Portugal’s energy minister Artur Trindade announced that starting in about a month, the government will begin replacing its petrol-powered cars with EVs. Information about the extent of the electrification has not been made public yet.
eltis.org, jn.pt (in Portuguese)

Aberdeen sets record: The city’s Co-wheels Car Club added eight electric cars and three electric vans to its fleet, making it the largest EV fleet for hire in the UK. The cars are Renault Zoe and the vans Nissan e-NV200. The car club now offers a total of 36 cars for hire, 16 of them electric.
eveningexpress.co.uk, aberdeencity.gov.uk

Affortable charger: ClipperCreek offers a new 40 amp EV charger in the U.S. The HCS-50 includes a 25 metre long charging cable and a three-year-warranty. It is capable of 9.6 kW of output and is available from 835 dollars.
insideevs.com, bmwblog.com

Colorado funds electrification: The U.S. state of Colorado, the Regional Air Quality Council (RAQC) and Colorado Energy Office (CEO) will provide funding for EVs, as well as charging infrastructure. Applications for “Charge Ahead Colorado” will be accepted until mid-August and must be filed online.
fleetsandfuels.com, cleanairfleets.org

H2 buses for Aberdeen: The Scottish city has taken delivery of the first four of ten hydrogen-powered buses. The buses from Belgian company Van Hool are equipped with fuel cells from Ballard Power Systems. The 19-million pounds (31m dollars) project received funding by the EU, the UK and the Scottish Government, as well as a broad range of private sector partners.
greencarcongress.com

New range record for BYD: In Copenhagen one of the BYD electric buses currently on trial in various European cities, achieved to go 325 kilometres (202 miles) on a single charge. Two of the electric buses have been in service in the Danish capital since January and were specially equipped to handle the rigours of the Scandinavian winter.
green.autoblog.com

No charging in London: A recent piece in the Sunday Times stated that 69% of all charging points in London had not been used in six months. Transport Evolved looks at possible causes and names five reasons why charging stations in London and in other cities are not being used as much as they could be.
transportevolved.com