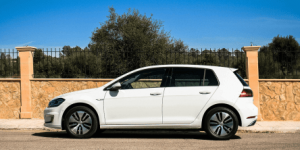 There’s a new competitor in the battery-electric segment: the Hyundai Ionic electric. We welcome it with open arms, since the selection for BEVs continues to be too slim and every newcomer deserves a round of applause. And we are happy to report that the Ioniq turned out well – it’s inherently consistent, efficient and well manufactured. And it shows what level Hyundai and Kia have reached, namely one quite high up – with ambitions to make it to the very top.
Read the full car review on electrive.com >>

Reading tip I: Musk goes Mars, or at least plans to send an unmanned space craft by SpaceX there by 2018. The mission is designed to probe what it would take to send human colonisers there in the future.
theguardian.com, wired.com

Reading tip II: The real range of the electric Golf exceeds the EPA rating, a six month trial suggests. Bengt Halvorson found the 83-mile conservative and was able to drive much longer on most days.
greencarreports.com

EV conversion kit: As part of a pilot project, the Indian government plans to support car owners willing to retrofit their car with a “specialised conversion kit.” Reportedly, this kit can be used on any vehicle not older than two to three years, but is only available from one manufacturer so far.
timesofindia.indiatimes.com, indianradios.com

Next-gen fuel cell partnership: Once again, New Flyer Industries ordered fuel cells from Ballard to power its H2 buses. The American bus manufacturer will be the first to use Ballard’s FCvelocity-HD7 module with integrated compressor and coolant pump and with reduced static as well as moving parts.
greencarcongress.com

Hydrogen refuelling station dispensers: How accurate are they? To test the meter, researchers at the National Institute of Standards and Technology (NIST) developed a prototype Transient Flow Facility that imitates the conditions of a FCV during refuelling.
greencarcongress.com

Comparing apples and oranges can sometimes reveal interesting facts. Like this report by Green Car Reports on the new E-Golf and Golf TDI. The electric Golf not only is lighter but almost as cheap as its fossil-burning brother. Winner on efficiency is the E-Golf, while the diesel scores on perceived sportiness.
greencarreports.com

Most clicked link on Wednesday was the Smart fortwo taking on, or crashing into an S-Class.
youtube.com