The Oak Ridge National Laboratory has exclusively licensed Safire to produce its drop-in additive for Li-ion batteries that prevents explosions and fire from impact. Safire, formerly known as BTRY, plans to locate facilities in East Tennessee to commercialise the liquid-to-solid battery technology.

The US Department of Energy (DOE) Vehicle Technologies Office has announced the selection of five industry-led research and development projects to develop lightweight materials to improve the energy efficiency of electric vehicles. 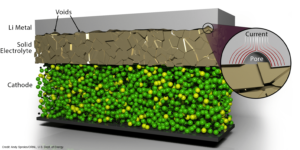 Scientists at the Oak Ridge National Laboratory say they have developed a scalable, low-cost method to improve the joining of materials in solid-state batteries. The process involves an electrochemical pulse to overcome a “key challenge” of producing solid-state batteries at scale.

Swatch update: The announced Super-battery is taking form. Serial production of the prototype is to commence in June – first for e-bikes, electric scooters and drones, followed by EVs in 2017. Swatch promises an 30 percent increase in capacity compared to the Gigafactory product. And it is said to charge faster.
handelszeitung.ch (in German)

Battery alliance: Oak Ridge National Laboratory and Solid Power have signed a licencing agreement for lithium-sulphur for battery packs of the next generation. He goal is to develop more energy-dense batteries for the rechargeable energy market.
eurekalert.org, ornl.gov

BioSolar update: The company says it concluded the first development stage of its allegedly revolutionary cathode technology (we reported). According to BioSolar, it could reduce the cost to less than 100 dollars per kWh. The next development stage will focus on the opimisation of production and preparation of demonstrators.
biosolar.com

Autonomous funding: The University of Michigan as received 2.7m dollars in funding from the U.S. Department of Energy (DoE) to test whether autonomous vehicles can help people drive more efficiently. Most cars used for the study will be electric or feature hybrid technology.
detroitnews.com

3D-printed home with hybrid: The Oak Ridge National Laboratory presented a 3D-printed building complete with solar panels and a hybrid vehicle, also fresh from the press. The vehicle is charged wirelessly with solar power and doubles as a battery and energy source for the house during the darker seasons.
reuters.com, ornl.gov

Scaling up: Webasto will present its electric High-Voltage Heater (HVV) for hybrid and electric vehicles at the Busworld in Belgium next month. Originally developed for passenger cars, the company successfully adapted it for buses and commercial vehicles as well.
webasto.com

The Chameleon by Daymak is true to its name, as the e-bike is a scooter and a bicycle. The pedals are more decorative, as the bike reaches 32 kph rather effortlessly. Via a Bluetooth app, drivers can customise their ride from turbo to off-road and eco mode. It is now available on the Indiegogo crowdfunding platform from 599 dollars.
prnewswire.com, gizmag.com, indiegogo.com

Useful rubber: Scientist at the Oak Ridge National Laboratory developed a process in which the carbon from recycled tyres could be used in Li-ion batteries. By slightly changing the characteristics of the carbon black, it becomes a better anode for the storage units.
sciencedaily.com, greencarcongress.com

Sunstar proposes e-bike kit: The Japanese company developed a mid-mounted drive unit, which can be installed on any bicycle to make it electric. The only requirement of the Virtus system is a special multi sensor controller to measure torque, pedalling cadence and crank angle.
bike-eu.com

Nissan production in Sunderland had been closed for a scheduled two-week maintenance, which took longer than expected. The first of the two lines, also producing the Leaf, went back online on Tuesday and to avoid further delays, the panel production had to be moved to an alternative press line.
sunderlandecho.com

An e-bike for every terrain: French designer Philipp Starck and Moustache Bikes show their e-bike collection M.A.S.S. at the Eurobike in Germany. The letters stand for “Mud, Asphalt, Sand and Snow,” with the snow version even being covered in fuzzy (fake) fur.
e-bike-finder.com (in German)

Most clicked link on Thursday was Auto Express‘ report on the next generation of the Nissan Leaf with renderings and interesting details about charging and battery options.
autoexpress.co.uk

German-Korean battery deal: LG Chem will start to supply batteries for Audi’s plug-in and micro hybrid vehicles, says the battery maker. No further details have been released, except that the deal is “worth hundreds of millions of dollars”. LG Chem now supplies batteries to 20 customers worldwide.
reuters.com, online.wsj.com

New Samsung SDI facility: The battery maker has started building its new production facility in China where cells for EVs will be made. An investment of 600 million dollars shall return 40,000 batteries annually for Samsung with production set to start this October.
koreajoongangdaily.com, ecns.cn

Lithium extraction facility: POSCO is building a large demo plant in Argentina to showcase its latest lithium extraction technology. The facility is being shipped in parts from Chile. The mining company mentioned growing demand from electric carmakers as one reason for expanding its operations.
4-traders.com, just-auto.com

A 100-mile range is enough: The Oak Ridge National Laboratory tells drivers and makers of EVs in its latest study, to not expect more than a 100-mile range to keep costs at an affordable level. At least until battery prices have fallen to less than 100 dollars per kWh.
greencarcongress.com, green.autoblog.com

Most clicked link on Tuesday was the news about the electric revival of Spanish Loryc and its Electric Speedster.
motorauthority.com