The coronavirus crisis makes for interesting data. With the British car market at an all-time low – no more than 4,321 new cars were listed this April – electric cars, Tesla especially, came out on top with sales staying relatively stable YoY.

UK: Electrified cars now at market share of over 10%

Registrations of alternative drive vehicle reached a new record of 10.2 per cent market share in the UK during November. This means more than one in 10 cars joining British roads were either hybrid, plug-in hybrid or pure electric. 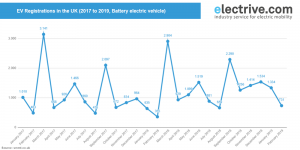 UK market electrified: In June, Brits bought 2,284 plug-in vehicles, 909 of which were purely electric. Most of them were Leafs. SMMT confirmed that Nissan now holds a 63.3% market share. No wonder the plug-in car grant could reach its 50,000 limit before the end of the year, since 34,126 cars have already been registered.
smmt.co.uk (June), electriccarsreport.com (Nissan), theguardian.com (Plug-In Grant)

Home charger via Amazon: ChargePoint will make its EV charger for domestic appliances available via the online retail giant later this summer. On Amazon, prices for the station range from 400 – 749 dollars, depending on power level, installation type and cord length.
greencarcongress.com

Bosch fast charger via GM: Bosch has introduced the Power DCPlus DC fast-charger in the U.S., where it will cost less than 10,000 dollars. It has the SAE J1772 DC Combo connector and charges with 24 kW. It can be ordered through GM’s Dealer Equipment Program and is ChargePoint enabled.
greencarcongress.com

End of free charging for Tesla in China? A sign next to a destination charger in Beijing indicates a utility and service fee of up to 15 yuan (about 2,50 dollars). Presumably, only third-party vehicles will be charged, as the last line on the the sign reads that charging is open to other brands. However, Tesla has not confirmed or clarified the information.
leiphone.com (in Chinese) via shanghaiist.com via valuewalk.com

EV and hybrid registrations in the UK.