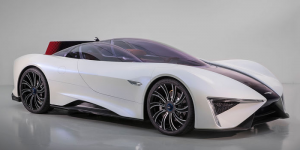 Techrules to take its turbine REx to the rails

Techrules has uncovered new uses for the turbine range extender it first applied to a hybrid hypercar. New cooperations with Chinese companies will see the TREV technology be used in transit trains, buses as well as electric vans.

Fuel cell REx by Magna: The Canadians have an electric van concept on the stand in Switzerland that uses fuel cells to extend the range. Magna’s FCREEV is based on the Mercedes Viano with a 30 kWh fuel cell stack coming from Proton Motor. The battery holds 16 kWh and serves for about 70 km of the total range of 350 km. The concept is not scheduled for production but serves Magna as mobile shop front rather. While the company said it sees “big potential” in the future, prices for both fuel cells and batteries are too high to be competitive at present.
autonews.com, magna.com (in German)

Techrules presents the production-ready Ren with turbine range extender in Geneva as promised previously. The sports car delivers up to 960 kW and has a range of 1,170 km, according to its Chinese creators. Production is to start by 2018 in a limited run of 96 track versions that can be ordered now. The Ren has a six e-motor set-up and offers three battery options (14kWh, 25kWh, and 32kWh) as well as two different turbines. The company plans to use tech components of this rather showy car that was designed in Italy in future models that could range from SUV to small city cars.
autocar.co.uk, electriccarsreport.com

Aston Martin Valkyrie is the name Aston Martin and Red Bull chose for their hybrid racer, that was known AM-RB 001 before Geneva. Audi CEO Rupert Stadler took the opportunity to open rivalries on the spot when he considered Audi’s very own hypercar.
carscoops.com, autocar.co.uk (Audi)

Hybrid digger by BMW: John Deere developed an excavator with the support of BMW’s subsidiary Designworks. Their concept is called Fixstern Backhoe and is currently on display at the CONEXPO-CON/AGG show in Las Vegas.
autoblog.com, bmwgroupdesignworks.com

MAN trials e-trucks: Commercial vehicle maker MAN issued its roadmap to electrification. From November 2017, electric trucks will serve nine partners in Austria on a daily basis. If this real life trial is successful, a small series may be made in Steyr from late 2018. Furthermore, MAN plans to present a pre-series electric bus that shall go into production by the end of 2019. Full series production of electric trucks will then likely follow in early 2021.
man.eu

Turbine hyper EV to go serial: Chinese Techrules confirmed its turbine-recharged electric car (TREV) for Geneva and will this time show the production-ready version. The 768 kW GT 86 is said to have a 2,000 mile range thanks to its turbine Rex. Expect 25 units before the year’s end.
autocar.co.uk

Another electric supercar is headed for the Swiss show. All that is known of Elextra is its stated aim to make the 0 – 100 km in less than 3 sec and that it takes inspiration from “Italian supercars of the past.” Danish entrepreneur Poul Sohl and Swiss designer Robert Palm are looking for investors.
motor1.com, elextracars.com

EV tyre: It will be the first appearance of Sumitomo brand Falken in Geneva and they bring a tyre made for electric and race cars to the show. The Ecorun A-A will go on sale Europe later this year and makes use of Advanced 4D Nano Design.
tyrepress.com

Tech destination Europe: Chinese Techrules is looking to set up a production facility in the old world to build its promised TREV (Turbine-Recharging Electric Vehicle). While no European countries have been named yet, the company says it is working on a “shortlist.” Regardless of the final location, Techrules will launch the first supercar within the decade.
worldcarfans.com, carsifu.my

Gearing up lithium production: South Korean Posco predicts rapid growth in demand for lithium due to the surging EV market. The steel manufacturer thus hurries to finish its lithium production plant by September and not in December, as initially planned. Annual production capacity is 2,500 tons of lithium, enough for about 60,000 EVs.
pulsenews.co.kr

Joint e-drive development: German Groschopp presents a drive module developed within the ESKAM project, which stands for electric scalable axle drive modules. It is a joint initiative by seven German companies, three universities and a Fraunhofer Institute. The drive has no permanent magnets and develops up to 45 Nm.
elektrotechnik.vogel.de, emobilight.de (articles in German)

Most clicked link on Monday was not yet another Tesla news, but that about a Chinese competitor. BAIC is building an electric supercar inspired by both the BMW i8 and the Californian EV maker.
autocar.co.uk 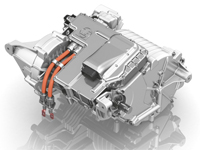 Mercedes with SK cells: Korean SK Innovation says it secured a contract to supply battery cells for Mercedes plug-in models from 2017. Other than it being a “large-scale project” involving multiple models, no more details have been revealed yet. Kia and BAIC are also customers of SK.
reuters.com, greencarcongress.com, koreatimes.co.kr

Turbine EV: Over 1,000 miles on one charge sounds impossible, but China-based Techrules claims that its electric racer can do just that. Power is given at 768 kW, reached with a turbine recharging system, whose inner workings are yet to be revealed. The super car concept is scheduled to debut in Geneva this spring.
autocar.co.uk, carscoops.com

Google search: The company hunts for a location for its new R&D centre. The facility will concentrate on autonomous driving technology, so it makes sense the internet firm is scouting Detroit, Michigan, rather than its native California. Google is looking for at least 30,000 sq feet for its lab.
autonews.com, autoblog.com

Hover boats: Paris is to trial autonomous electric boats hovering above the Seine. The Sea Bubbles derive their name from their encapsulated nature. Only four “marine wings” touch the water, while the boats float above much like a catamaran. With a speed of up to 18 kph they will take passengers, eventually without a captain on board. If testing is successful this summer, the water cabs could be launched by 2017.
inverse.com, thelocal.fr