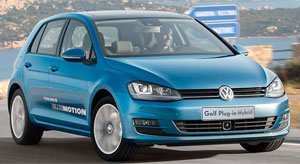 VW ready to plug in: According to Jochem Heinzmann, head of Volkswagen Group China, the carmaker wants to introduce more than 20 all-electric and plug-in hybrid models on the Chinese market “in the near future.” These will range from small cars to full-size SUVs.
uk.reuters.com

Hyundai and Kia think electric: With the Soul EV, the latter already has an electric car in its portfolio. According to a Korean news portal, Kia now plans to introduce the all-electric K3 in South Korea in 2016, while partner Hyundai will unveil its Avante electric.
koreabizwire.com

Mercedes GLE as PHEV: The face lifted version of the M-Class will become available next year and be renamed GLE. New spy shots show that it is also planned as a plug-in variant. It’s not known whether the drivetrain will be that of the C- or S-Class.
autoblog.com

Affordable Renault plug-in: The French manufacturer presented its Eolab concept at the Motor Show in Paris. The production version of the plug-in hybrid is said to cost no more than the Clio DCi 90, priced at around 18,500 euros. When the PHEV will go into serial production remains unknown.
inautonews.com, 4wheelsnews.com

Price adjustment for Tesla P85D: The all-wheel variant of the Model S was said to cost 120,170 dollars, when it was introduced a few weeks back. According to Inside EVs, Tesla quietly decontented the minimum requirements for the P85D, making the base model available starting at 105,670 dollars.
insideevs.com