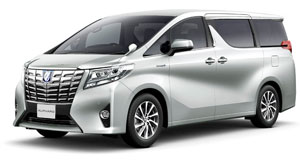 New hybrid vans for Japan: Toyota announced an all new version of both its Alphard and Vellfire minivans. The two eight-seaters will also be offered with a hybrid drivetrain, which combines a 2.5 litre engine with 152 hp and two electric motors with 105 kW and 50 kW.
carscoops.com, bangkokpost.com

e-Quattro in the making: According to the magazine Car, this year’s Audi A4 and 2017 TTQ could be fitted with an AWD e-quattro system. They hybrid drivetrain consists of one combustion engine and two electric motors with a combined output of up to 408 hp in high-performance versions. Moreover, the report mentions that the TTQ could be offered with wireless inductive charging.
carmagazine.co.uk

Tesla fighter from China: The state-owned Chinese carmaker BAIC wants to introduce an all-electric premium car next year that has a range of up to 400 km to compete with Tesla’s Model S sedan. No further details have been announced yet.
bidnessetc.com

Volt called back: An unknown number of Chevy Volt built between 2011 and 2014 are recalled due to faulty rear liftgate struts. Whether the callback also concerns the Opel Ampera is not known at this time.
facebook.com via transportevolved.com, insideevs.com

Tesla steps up offer in China: The Californian carmaker plans to introduce its Model S with all-wheel drive in China in the coming months, as well as the new Model X SUV starting early next year. Moreover, Tesla aims to optimise its sales process there.
valuewalk.com, bidnessetc.com