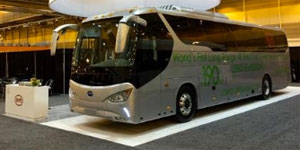 BYD unveils electric coach: The Chinese manufacturer introduced its first long range coach C9. Equipped with a 365 kWh Li-ion iron phosphate battery pack that can be quickly charged, the C9 can carry 47 people at highway speed for more than 190 miles The C10 and C6 coaches will follow this year.
greencarcongress.com, electriccarsreport.com, prnewswire.com

Twice the range: The next generation Zoe will come with a real-world range of 300 kilometers, head of Renault Z.E. Béatrice Foucher told Les Echos. According to the French paper, the new Renault Zoe as well as the new Nissan Leaf, possibly equipped with a 48 kWh battery pack, will be ready in 2017.
lesechos.fr (in French) via insideevs.com

Joint venture scrapped: Mitsubishi and Renault have ended their planned cooperation before it even began. Costs and currency-related issues were given as reasons. However, Mitsubishi still ponders the joint development of a small car together with Nissan, including an electric version
nasdaq.com

Paris ban to go ahead: Mayor Anne Hidalgo now gave a timeline for her measures to fight pollution in the city. From July 2015, the most polluting buses and trucks will be banned. In July 2016, the ban will be extendes to all vehicles over a fixed emission level, though no clear definition has been provided yet.
france24.com

Harmonising effort: The UK will finally harmonise its e-bike regulations with the rest of Europe in a long expected move. The Electrically Assisted Pedal Cycles (EPAC) Regulations 2015 will update the UK’s original 1983 legislation and come into effect from January 2016. They will practically rule out ‘twist-an-go’ vehicles. However, speed pedelecs are still awaiting a more harmonious approval.
bike-eu.com

Volvo V60 PHEV review: The Volvo V60 PHEV has been taken for a spin by Cars UK. While the test drivers were impressed by performance and economy, the rather hefty price tag is a far cry from acceptable, especially as the V60 does not feature the new Drive-E engines – yet.
carsuk.net