Daimler-LeEco alliance? International Business Times reports that mangers from both companies met in Peking to talk about a possible corporation in the fields of connected EVs and carsharing. Is this LeEco’s (aka LeTV’s) next coup? The Chinese are already working with Aston Martin, Faraday Future and Beijing Automotive.
ibtimes.co.in 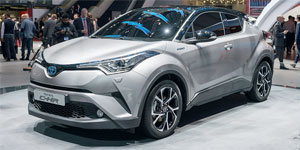 C-HR hybrid scheduled for late 2016: Toyota officially presented the new crossover that will also be made available with the same hybrid system as the Prius. Productions start is set for the end of the year. Meanwhile, the manufacturer showed the especially luxurious and limited edition ‘Sapphire’ of its RAV4 Hybrid.
carscoops.com (C-HR), newsroom.toyota.eu (RAV4)

Volvo bets on small hybrids: Volvo CEO Håkan Samuelsson told Autocar that 2018 XC40 will be the first to use the company’s new compact modular architecture (CMA), followed by V40 and S40 variants. Moreover, all 40 series model will be available as PHEVs. Samuelsson says that small hybrids will replace diesel cars “on a 1:1 basis.”
autocar.co.uk

Combustion engine part of the mix: The small-volume manufacturer took the wraps off its C8 Preliator in Geneva. Due to lack of time, its sports a V8 instead on an electric motor. But Spyker CEO Victor Muller says that combustion engines will remain part of the portfolio, as he plans to also build luxurious petrol-powered cars.
autocar.co.uk, carscoops.com (C8), worldcarfans.com(future plans)

New BMW e-bike: Right on time for the new biking season, the Bavarians are bringing a new pedelec to the market. The Cruise e-bike with Bosch powertrain and 400 Wh battery starts at 3,100 euros.
bmwgroup.com

Mitsubishi electric truck: The Japanese unveiledtheir Fuso Canter E-Cell at the Work Truck Show in Indianapolis. The vehicle boast 100 kW and can go 100 km on one charge. It was just recently sighted during testing in Portugal, but will first be introduced in the U.S.
trucknews.com, truckinginfo.com