Norway to go 100% electric: The path-breaking Nordic country presented its National Transport Plan for 2018 – 2029, which calls for massive electrification. By 2025, all new cars, light utility vehicles and buses shall be emission free. The same goes for 50 percent of all new trucks, although they have until 2030. Looks like it is time to issue some models that can actually fulfil the to be expected demand.
evfleetworld.co.uk, hybridcars.com

Range extended i-series: BMW says it will offer an optional range extender for all i-series models, just like it does with the i3. Even though it is rather a “psychological thing,” BMWi head of product Henrik Wenders told Car and Driver. Also, all i-models including the upcoming i5 will keep the carbon chassis.
caranddriver.com

More Mitsubishi EVs: The Japanese manufacturer concretises its plug-in path. It will launch five new SUV models by 2021, all with hybrid or electric drivetrains. That includes an all-electric production version of the eX concept shown in Geneva, which will hit the road by 2020. Also, Mitsubishi will offer a new all-electric Mirage from next year.
carmagazine.co.uk, autoexpress.co.uk 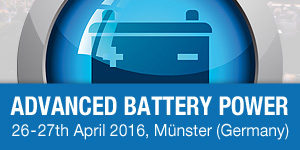 8th International Conference Advanced Battery Power on 26 and 27 April 2016 in Münster/Germany: The conference is a great opportunity to get informed about recent developments in battery research with 60 lectures and more than 190 scientific posters. Approximately 650 participants are expected. The versatile agenda comprises the entire battery supply chain from raw materials to the battery cell, from individual cells to entire battery systems for mobile and stationary applications. Conference language is English. Read more …

Definite pricing: Infiniti issued pricing for the new Q50 in the U.S., where the Hybrid Premium variant will start at 47,050 dollars. It couples last year’s electric drivetrain with a 3.5-liter V6 for a combined output of 360 hp (about 270 kW).
carscoops.com, worldcarfans.com

Honda FCV debuts in Europe: The hydrogen-powered Clarity Fuel Cell is on display in Geneva. From there it will arrive at UK shores this September. However, Honda expects to sell no more than 10 units for about 60,000 pounds on the isles by 2017.
carmagazine.co.uk

Electric motorcycle for UK: Italian Energica will start trading its electric motorcycles like the latest Ego and Eva in Great Britain. British Moto Corsa is to be the official dealer on the isles.
lastampa.it (in Italian)