Is this the end? Gas guzzlers will be banned from sale in Norway by 2025, Dagens Naeringsliv reports, claiming all governing parties have agreed to stick to the National Transport Plan initially proposed by Labour. Only the left-wing parties confirmed this so far, while the populist Progress Party corroborates that talks are on-going. Elon Musk welcomed the move on Twitter enthusiastically nonetheless.
qz.com, independent.co.uk 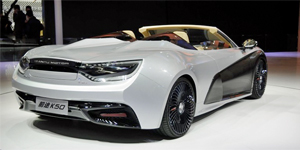 China closes up: Chinese Tesla competitor Qiantu Motor prices the sporty K 50 at 106,000 dollars when it launches next year. And its ambitions go further as the firm aims for 15 percent market share in China by 2020 with two more entry-level electric models. The Suzhou factory is to start production before the year’s end and shall quickly gear up to churn out 450,000 EVs annually.
bloomberg.com

Polestar positioning: Volvo will launch both the S90 and V90 as Polestar variants with a powerful hybrid drivetrain that could deliver up to 600 hp. This means the 87 hp electric motor that currently drives the rear would be replaced with a more powerful unit.
motortrend.com

Autonomous acceleration? A Tesla Model X crashed into a building on its own. The incident happened at a parking lot where the SUV “suddenly and unexpectedly accelerated at high speed” and became uncontrollable, the driver claims. More details have yet to emerge.
insideevs.com, electrek.co

Meanwhile, Tesla released software update v7.1 for the Model X. It allows to better adjust the EV’s seats via touch screen and to close all doors remotely and at once, including the trunk and falcon wings.
teslarati.com

Honda Freed: Japan will see the launch of a new version of the Freed van based on the Honda Jazz this September. As with previous models, a hybrid variant is included but this time allegedly adopts the new i-DCD 7-speed dual clutch hybrid system.
carsensor.net (in Japanese, with renderings) via indianautosblog.com