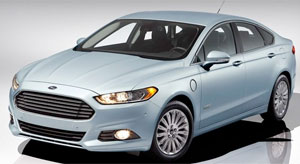 Ford update: Last year, the U.S. manufacturer had presented its strategy to develop 13 electric or plug-in models by 2020 (we reported). That line-up could include commercial vehicles. Ford is investing 4.5bn dollars in the development, as the carmaker is certain that electrified cars will dominate the market by 2030.
freep.com, ford.com

Daimler shows Tesla-fighter in Paris: Mercedes announced that it will be premiering an electric “show car embodying a concrete vision of a totally new generation of vehicles.” That sounds like the Tesla-fighter that CEO Dieter Zetsche has promised. Daimer will also show an electric version of all three Smart variants, as well as the Maybach.
daimler.com

Mission E offshoot planned? Porsche seems to be thinking about building another electric sports car based on the Mission E. According to Automobile, it could be a four-door coupé. Moreover, Porsche could extend its SUV line-up, using hybrid drives based on Audi or VW technology, as well as going all-electric.
automobilemag.com

S-Pedelec by Peugeot: The company will also be showing two wheels in Paris. The eU01s features an electric motor from Bosch, which pushes the cross-country bike up to 45 kph for as much as 95 km on one charge. The pedelec will arrive on the market in December.
greencarcongress.com, peugeot.com

VW manager switches to Faraday: The rising EV maker has snitched VW’s former Senior Vice President Product Marketing & Strategy, Jörg Sommer. He has been working in the industry for decades and will take over product marketing and planning the market launch for Faraday’s vehicles.
electrek.co

Volvo in India: The Volvo XC90 Plug-in Hybrid is now available in India. The Swedes see a lot of potential in the market and are looking to launch other PHEVs as well as its planned electric car there as well.
indiatimes.com