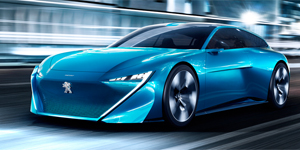 Peugeot plug-in concept: The French will bring the Instinct Concept to Geneva, a study that embodies Peugeot’s vision of autonomous and connected driving. The future is at least partially electric – the concept is equipped with a 300 hp plug-in hybrid system.
autocar.co.uk, autonews.com

Seat’s first electric car has been revealed at the Mobile World Congress in Barcelona as planned. It is indeed the Mii that utilises VW e-Up technology. While the first models will serve as shared electric cars for employees in Spain, rumour has it the Mii EV may hit the market by 2019.
autocar.co.uk, youtube.com

High-level lobbying: Initially, China wanted to force automakers to shift 8 percent of their production to electric and hybrid vehicles in 2018. This may now be moved to 2019 and the percentage possibly lowered. Germany had followed complaints by makers like Volkswagen, whose electrification remains slow but was echoed by Chinese manufacturers. Details of the new rules are currently being worked out in China.
global.handelsblatt.com

Mini to leave Britain? As a “hard Brexit” becomes more likely, BMW ponders to move production of the electric Mini from Oxford to Leipzig or Regensburg, Handelsblatt has learnt. The Germans may also tap Dutch Nedcar, which already builds two Mini models for BMW.
handelsblatt.com

E-SUV by Bentley: The British luxury brand sees a market for a smaller SUV just below the Bentayga and considers making it all-electric, according to head of technology Rolf Frech. But such a Bentley EV would kick off no sooner than by 2020 and only after planned PHEV variants.
autonews.com

Tesla and FF appoint new CFOs: Tesla’s CFO Jason Wheeler will abandon his post in April to be replaced by former CFO Deepak Ahuja. Wheeler is off to work on public policies, a bold move in the current political climate. Over at Faraday Future, Stefan Krause, former executive at BMW and Deutsche Bank, is to take care of finances at the new EV maker and will have a lot to sort out.
manager-magazin.de (FF, in German), electrek.co (Tesla)