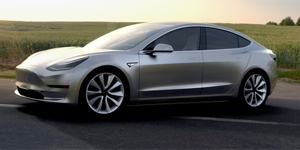 Tesla increases credit line: 800m have been added to Tesla’s creditline as the EV maker’s need for cash increases closer to the Model 3 launch. Deutsche Bank is the administrative agent of the credit agreement, which is now worth up to 2.0bn dollars depending on the option. On a similar note, Tesla wants to stock up its stores in Germany with six new locations planned for this year. German store no. 17 will open its doors in Porsche’s hometown Stuttgart next month.
electrek.co, automobilwoche.de (Stores Germany)

New Formula E motors: Audi and Schaeffler will deliver the next drive for the FE electric racers over the coming three seasons. Their cooperation will include joint work on the electric motor, suspension and power electronics. Schaeffler has been the drive behind the Team ABT Schaeffler Audi Sport since season 2015/16 but with Audi joining the Formula E officially, work that had been done behind the scenes is to intensify and it looks like this is a real commitment, at least until 2020.
greencarcongress.com, pressebox.de

France plans price parity: La Grande Nation is about to raise taxes on diesel to match those on gasoline, said Nicolas Hulot, France’s minister for the environment. Furthermore, France plans to quit exploring oil and gas as no new such permissions will be granted.
bfmtv.com (Diesel, in French), bfmtv.com (Oil and gas, in French)

BMW presents next X3: This latest SUV by the Bavarians is build in Spartanburg and the 2018 X3 offers different engine options with the exception of diesel. Both an electric and plug-in hybrid variant are due by 2019.
caranddriver.com, autocar.co.uk

Nothing escapes a spy shooter and this time it captured a Ford Escape Energi mule sporting a plug-in port. The 2020 Ford Escape Plug-In Hybrid is scheduled for early 2019.
insideevs.com

Maximise me: BMW i3 drivers in the States may soon upgrade their battery to 94Ah just like clients in Europe. The assumption is based on a pilot programme that saw 10 electric BMWs in the U.S. getting a bigger pack but it is unclear, when the option will become available to all.
bmwblog.com