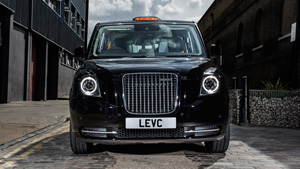 LTC embarks on electric future: London’s electric taxi has been unveiled in its final design today and the Geely-owned subsidiary used the occasion for a revamp of the brand. Now dubbed LEVC (for London EV Company, formerly London Taxi Company), the firm hopes to extend its range beyond the British border and has found one new customer already. Dutch RMC put a pre-order over 225 so-called TX cabs in. Plus, the order books for the UK will open on August, 1. Nora Manthey was at the launch and spoke to LEVC’s CEO Chris Gubbey and Mike Hedges of Unite union of taxi drivers. In summary, LECV and London face three challenges: growth, competition, and charging infrastructure.
read more on electrive.com >>

Faraday gives up on factory: For now, FF has stopped its plan to build a 1bn dollar factory close to Vegas for good but still did not admit the final word may has been spoken officially. Instead, the ambitious start-up so unfortunately backed by financially stricken LeEco is looking to realise its EV production plans elsewhere and within an existing plant. If the grandly announced FF91 will ever become a reality remains unclear as ever in the current situation.
electrek.co, autoblog.com, businessinsider.de, insideevs.com

Audi presents A8: The German carmaker has unveiled the next generation of its top-of-the-line model, scheduled to hit the shelves in late autumn. All versions will come with 48 volts mild-hybrid tech. That is until the A8 L e-tron quattro with 449 hp and a more powerful plug-in hybrid drive with the ability to benefit from Audi’s 3.6 kW inductive charging system is to follow.
carscoops.com, autocar.co.uk, audi-mediacenter.com

BMW confirms its full presence in the Formula E from season 5, when it will be taking over the Andretti entry from 2018/19 onwards. Expect to see both Audi with Abt and BMW go head to head on the race course and it is very likely we will see some tech advances coming out of the box as well.
motorsport.com, bmwgroup.com

Daimler invests in CleverShuttle: Daimler subsidiary EvoBus GmbH joins Berlin-based CleverShuttle as a strategic investor with a minority stake. The start-up operates a ride sharing mobility service in Berlin, Munich and Leipzig. Together the “newly-weds” seek to develop on-demand services for firms and transport associations.
media.daimler.com

First EV made in Mexico: Mexicana Motores Limpios presents the first locally made EV. The compact Zacua’s range is about 160 km. 200 units shall roll off the lines in 2018, before capacity shall increase slightly to 300 by 2019. In the next 4 years, MML intends to launch 4 more models and to export, too.
riviera-maya-news.com