Polestar 1 arrives: Volvo revealed the first model of its now wholly electrified label Polestar, which is taking the lead in the Swedes’ e-offensive. The Polestar 1 is a Grand Tourer Coupé for four. Driven by the 600 hp plug-in hybrid system, it boasts an electric range of 150 kilometres, which places it almost in the realm of a range-extended EV. No wonder the premium model forebodes the upcoming all-electric Polestar 2, designed to rival Tesla’s Model 3. A purely electric SUV, the Polestar 3, has been lined-out too. But first things first and so the Polestar 1 mass production will commence in China from 2019.
autonews.com, autoexpress.co.uk, autocar.co.uk

News from production hell: Tesla is experiencing massive problems as it tries to bring Fremont up to volume production speed reportedly. The reasons however appear manifold and rumours range from the EV maker simply having overestimated its abilities to more concrete difficulties with welding the steel chassis of the Model 3 (the Model S and X are made of alloy). Some light has been shed by an Oppenheimer analyst, who puts the blame on a “small number of suppliers failing to deliver on time.” Bear in mind though that he is a shareholder himself. More noteworthy info was deliberated by Tesla supplier Polytec, that said Tesla may start making the Model 3 in Europe at Magna in Austria.
carscoops.com (welding issue), electrek.co (supplier issue), insideevs.com (move to Magna)

Daimler to split up three-way: The German corporation is looking to reorganise itself and at the moment three companies are likely: one for Mercedes-Benz cars and vans, another trucks and buses, and a third for financial services. The decision is far from final though as neither managers nor the board or shareholders have approved the plan yet. Ultimately the split would make it easier for Daimler to sell of parts of its business and the carmaker reasons such changes would help to adapt to a fast-paced environment. In any case, seeing such changes through is likely to take years of both planning and negotiations with stakeholders although Daimler aims at 2019.
carscoops.com, daimler.com 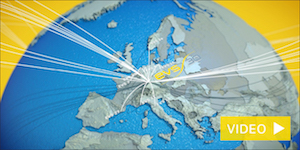 Mazda is going ahead with its range-extending rotary engine of which first plans appeared in March this year. Mazda’s head of engine design, Mitsuo Hitomi now confirmed that the rotary will be utilised for the brand’s premier EV due by 2019. It will the sit side by side the all-electric variant.
autonews.com

Navya teases the world debut of another autonomous EV set at November, 7. The French have not handed out much information but it is likely to be based on the existing shuttle Arma, maybe a bigger brother this time.
techau.com.au, navya.tech

Cummins acquires Brammo: Their first electric truck has not been in this world longer than two months and Cummins already progresses on the path to electrification. It has now taken over Brammo, formerly known for electric motorcycles and now specialising in batteries.
greencarcongress.com, electrek.co, businesswire.com