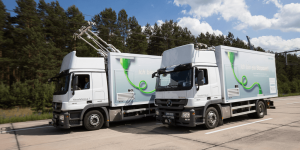 The state of Hesse has secured the first stretch of the so-called eHighway that will run on the A5 Autobahn between Langen/Mörfelden and Weiterstadt once construction is complete by the end of 2018. The entire project is paid for with 15 million euros from the Ministry of the Environment (BMUB).

Testing is to commence throughout 2019 and the local Government in Hesse says that three carriers have agreed to take part in the trial with one truck each and that talks with two more firms are on-going.

The infrastructure has been developed by Siemens and allows electric trucks to charge via catenary while driving. The 10 kilometre eHighway in Hesse is being developed simultaneously to another track that is already under construction in Schleswig-Holstein on the A1 motorway (we reported). Plans for a third test track have also been revealed and it will be located in Baden-Wuerttemberg but this time on a federal road.

But Germany is not the only country to look into eHighways. Siemens has exported trials to California’s Los Angeles region for example and Mack just fitted its truck to connect to the overhead wire there so that the plug-in hybrid may now drive electrically all the way (we reported).

The world’s first eHighway though was installed in 2016 in Sweden on a motorway north of Stockholm, where Scania is running two hybrid trucks.

Siemens had conceived the concept as early as 2012 and has been looking to apply it worldwide since. The electric highway India had started to trial though may have been inspired by Siemens but is of the country’s own making. The government in Delhi had considered to reserve a lane on each and every national highway in March (we reported).