With more than a third of the cars driving on China’s roads, the rest of the world has some catching up to do. Second place in the worldwide ranking is held by the USA, with a total of 751,510 vehicles, followed by Japan with 201,410 vehicles. 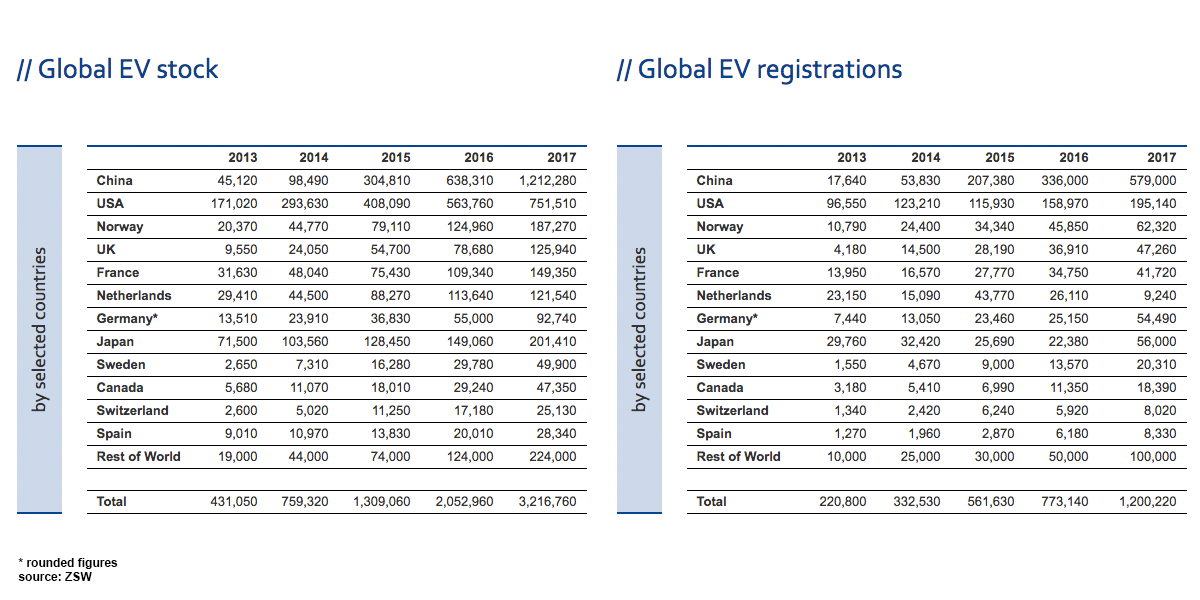 ZSW also compiled the statistics using new vehicle registrations at the end of the year. This means that in 2017, a global 1.2 million vehicles with charging port were registered. That is a new record by far, as the 2016 registration was around 770,000 and 2015 only had 550,000 vehicles registered.

This statistic mirrors the total stock, as the leading nations are again China with 579,000 new registrations, followed by the USA at 195,140 and Norway, this time ahead of Japan, at 62,320 and 56,000 registrations, respectively. Germany places fifth in the lineup with 54,490 new vehicle registrations. Almost all of the 12 nations analyzed showed growth in the area of renewable energy transportation, with exception of Holland, which, due to modified subsidy programming, saw new EV registrations drop from 43,770 in 2015 down to mere 9,240 in the past year.

In terms of branding, the most sold EV brand in 2017 remained Nissan, however competitors are beginning to catch up. While Nissan was able to show 291,280 total electric vehicles of their own on the roads, BYD and Tesla managed to achieve double the new registrations that Nissan did. This allowed them to significantly catch up in the total global market, and are on the heels of Nissan, with 286,430 vehicles from BYD, and 262,040 EVs made by Tesla on the road. 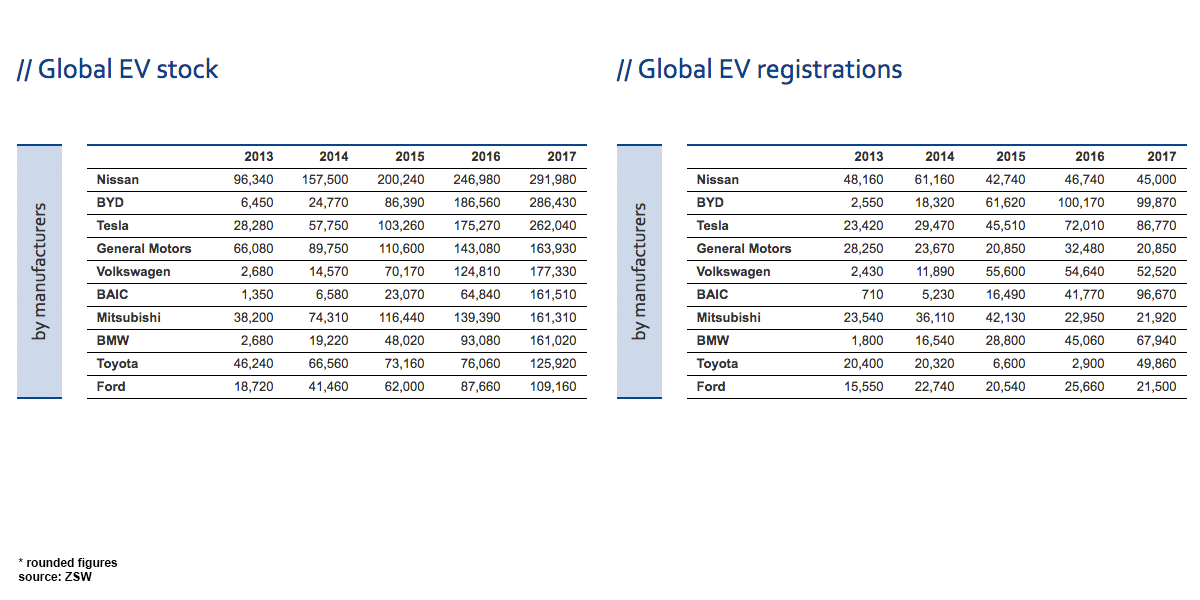 Three other car manufacturers managed to make a dent in the figures from last year, as BAIC managed to sell 96,670 vehicles, more than double what they sold the prior year, while BMW managed a jump from 45,060 to 67,940 new vehicle registrations and Toyota impressively jumped from 2,900 to 49,860.

The most popular models have remained mostly the same: the Nissan Leaf, the Tesla Model S and the Chevrolet Volt are still the most driven EVs in the world. What is interesting, is that Tesla managed to outperform Nissan with the new registrations, but the incoming Leaf II will likely change that back. The biggest development here was the BAIC EC, which went from 4,130 new registrations in 2016 to 78,080 in 2017, leaving all competition considerably in the dust, at least where new registrations are concerned. 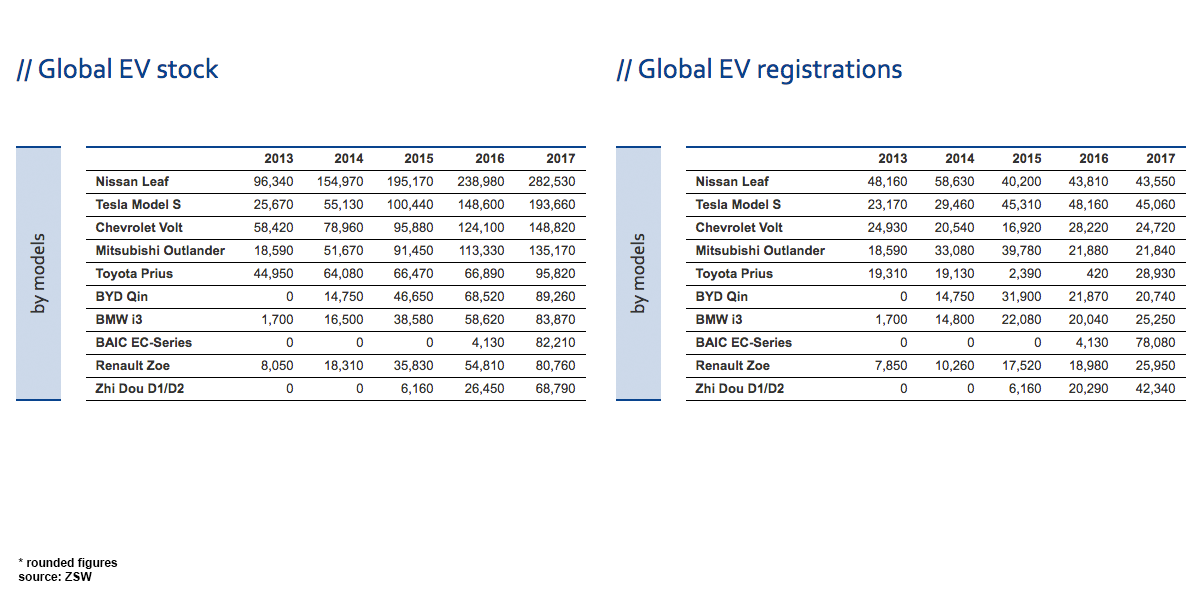 Another factor of note is the boost that ride-share vehicles have brought, as many organizations employ electric scooters in cities. In Germany alone, the number of electric scooters more than doubled since 2015, going from around 5,000 to 10,500 units deployed in German cities. 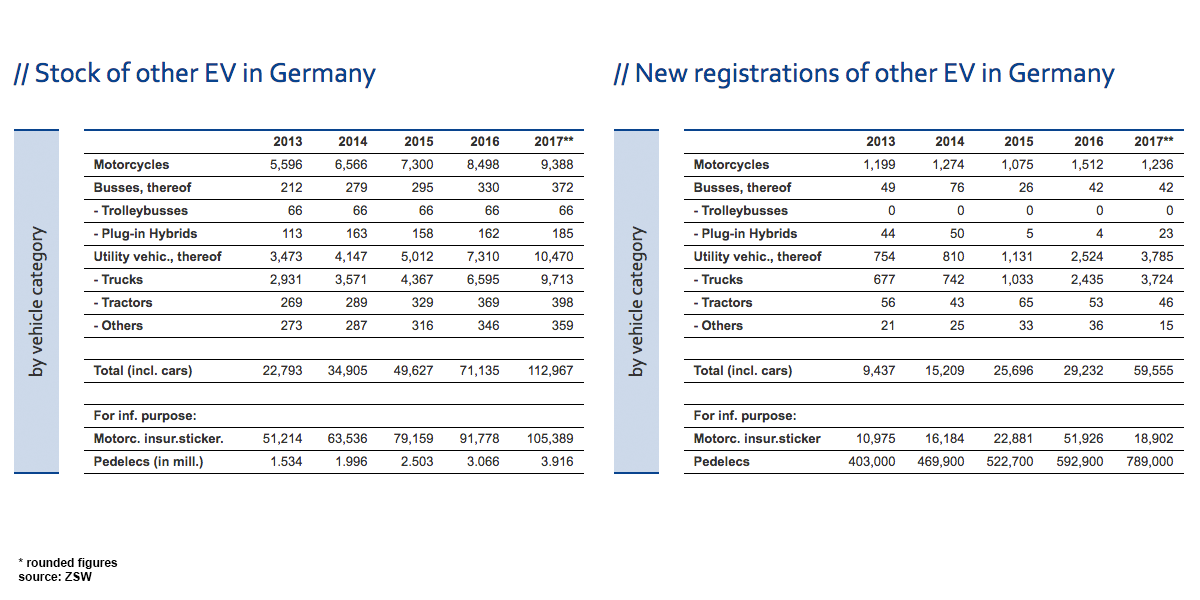