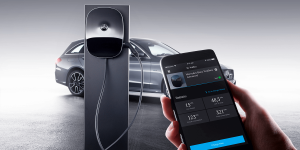 While other carmakers are moving away from diesel entirely, Daimler will show a preproduction of its new line of plug-in diesel hybrids. Both the C class and E class will exhibit the system and are set to launch this summer.

Mercedes-Benz will for the first time combine their four-cylinder diesel with the third-generation hybrid drive. This powertrain concept will be utilised from the C-Class upwards. Scalable, it can be transferred to a large number of rear-wheel drive model series and body styles as well as left- and right-hand drive variants, according to Daimler.

For the C-Class and E-Class on display in Switzerland, Mercedes aims for 90 kW electric output, an additional electric torque of 440 Nm and an electric range of around 50 km in the NEDC. The hybrid system has been developed together with Bosch and the electric motor was specially designed for the 9G-TRONIC plug-in hybrid transmission.

The diesel plug-ins are powered by a new lithium-ion battery with 13.5 kWh. While its size remained unchanged, cell chemistry has changed from lithium-iron-phosphate (LiFePo) to lithium-nickel-manganese-cobalt (Li-NMC). The battery system comes from the Daimler subsidiary Accumotive.

A new on-board charger is said to double the charging rate from 3.6 kW to 7.2 kW. A discharged battery can thus be fully recharged in two hours at a wallbox. The latter can charge an electric or hybrid car with up to 22 kW. For the first time, Daimler has also enabled various functions to be controlled from a smartphone. These include charging control, user management and consumption overview.