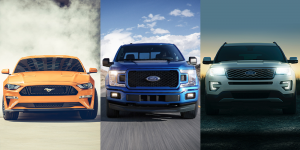 Ford has released their new plans for the future direction in the North American market: five new hybrid SUVs and one electric SUV are included in the 8 announced vehicles. The first fully battery electric Ford is expected in 2020.

After investing 11 billion dollars, Ford is looking to significantly update their lineup. They plan to change their product mix to include more trucks and SUVs, as well as replacing three quarters of its vehicle lineup. The popular F-150, Mustang, Explorer, Escape and Bronco models are all expected to return in a more environmentally friendly version.

The lineup makeover will include providing hybrid and electric version of current vehicles, as well as the introduction of several new vehicles, starting with the first battery electric utility vehicle in 2020; the first of 6 which are planned to have been released by 2022.

Ford is also working to lower the price of EVs, using a hybrid system that is designed to be more efficient and less expensive than previous generation. The savings were achieved using supply base relationships, using common cell and component designs, as well as manufacturing their own motors, transmissions and battery packs.