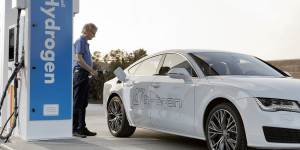 Audi is planning to to take the lead for VW’s hydrogen cars and wants to launch a production fuel cell model by 2020, albeit in a small series. Rupert Stadler announced the news at the annual press conference and also said to go serial with their latest autonomous concept.

The Aicon concept had made its debut at last year’s IAA, where it displayed no stirring wheel nor pedals. A rather radical autonomous design, at least for a production series in the current regulatory climate. Accordingly, Stadler called it a “luxurious lounge for long-distance travel” which Audi has included in its “longterm production plan”.

On a more imminent note, Rupert Stadler confirmed the launch of the e-tron this year and Audi will ask German buyers to pay 80,000 euros for it. He also updated the pre order count with orders from Norway reaching 3,700 units. Furthermore, expect to see a sporty version by 2020, when the e-tron GT is to hit the roads (we reported).

That same year will also see the launch of said small series of a fuel cell Audi. Stadler did not go into detail other than saying that “hydrogen is another perfect energy source for tomorrow’s e-mobility.”

However, the idea for fuel cell cars is not new for Audi but in fact a refocus. Stadler had announced back in 2016 that Audi would take over the lead in developing fuel cell technology within the VW Group. They had presented the H-tron quattro concept in January 2016 but had not said anything about a series. So 2020 it will be. If in form of the H-tron quattro remains to be seen.