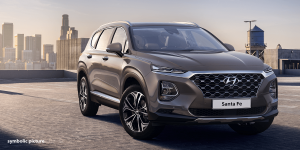 Hyundai has put its updated SUV called Santa Fe in the spotlight at the Auto Salon and said, that there will be both a hybrid and a plug-in hybrid variant. When the electrified models will hit the shelves is as of yet unknown though.

The Hyundai press release reads: “At the 2018 Geneva Motor Show, Hyundai Motor announced its plan to launch the New-Generation Santa Fe also in a hybrid and plug-in hybrid version.”

It should not be too long though as Hyundai is pushing for electrification. Together with Kia, the Koreans plan to launch 14 new all-electric models by 2025 reportedly. Updates on the hybrid front should thus be quick and have already started with the latest Sonata for example.

Audi to launch a fuel cell model by 2020